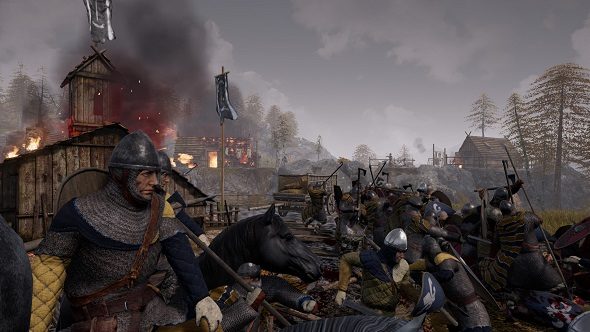 Following its first teaser back in March, notable strategy publisher 1C Company has announced their latest title, the medieval RTS Ancestors. Designed for both gamepad and keyboard and mouse users, this RTS should be accessible to any strategy fan.

Work on your battlefield tactics with these great PC strategy games.

Set in the Middle Ages, Ancestors has players taking control of one of four European factions to wage war across the continent. As either the Slavs, the Anglo-Saxons, the Germans or the Vikings, you will have to balance growing your civilization with waging war against enemy tribes. As such, combat combines resource management, base building and troop tactics across vast battlefields. With players having to juggle so many things at once, the streamlined command system will allow generals to effortlessly switch between their supply lines and frontline forces.

In battle, players will have to account for factors like morale, terrain and combat experience to seize the day. It’s not simply a case of putting your strongest soldiers at the front and hoping they will hold the line, commanders will have to exploit high ground and their opponent’s flagging strength to turn the tide of battle.

At any point during combat, players can switch from the traditional top-down view to Ancestors’ special cinematic battle camera. As seen in the trailer above, this shows the fighting at its absolute bloodiest, showing the individual struggles of your soldiers as you push for victory. While 1C Company are publishing Ancestors, the actual developer is Destructive Creations, the studio behind the infamous twin-stick shooter Hatred. Clearly adept at showing buckets of blood and gore, let’s hope they toned down the edginess for this historical RTS.

Along with a campaign for each of the four factions which traces specific landmark battles, Ancestors will have a fully developed multiplayer suite for commanders who want to prove their battle prowess to the world. With Ancestors currently in development for both Xbox One and PC, it is possible that we may see cross-platform play, aided in part by its native gamepad support.

1C Company are expected to reveal a release date and a demo build at this year’s Gamescom, so stay tuned for more information this August. You can also check out the Ancestors’ Steam page for all the latest on this medieval gore-fest.