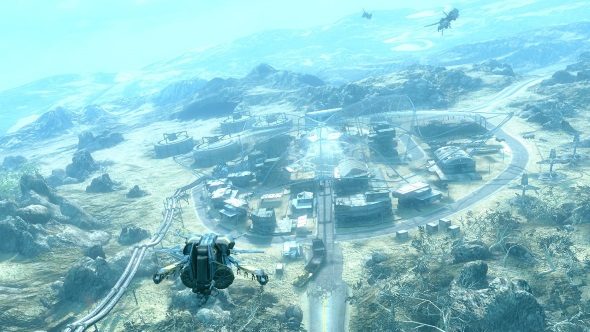 A complex blend of genres, including vehicular combat, starfighter piloting, capital ship command and planetside infantry tactics, and an indie online multiplayer game to boot? It sounds like a fools errand, but Strangely Interactive haven’t given up on their wildly ambitious hybrid FPS Angels Fall First in nearly a decade, and their perseverance has paid off this week.

Currently featured on the Steam front page and accompanied by a steep sale and a slick new trailer, the game now boasts a multitude of well-populated online servers. Proof that even in this post-greenlight era, getting featured by Valve still means a lot for indie developers.

A lot of games on our Best Of Indies list got launched into the limelight by being featured on Steam. it’s interesting to see how Valve’s percieved value has waned since the days of Spelunky and Hotline Miami.

While a concurrent player count on Steamcharts of just over 1000 isn’t anything inherently amazing, it’s a marked improvement on its original Steam launch peak of 269 players back in the September of 2015, and the game has seen an astonishing amount of tuning and polishing since its original release, although not enough to take it out of Early Access quite yet.

Angels Fall First has been in development for a very long time. Originally an Unreal Tournament 3 mod and later ported to UDK, it’s always seemed like more than a small studio could really hope to manage, replicating Battlefield-style infantry warfare but scaling up to capital ship warfare, with individual players manning various weapons systems while the captain flies. Somehow, it just worked, though, and early tech demos were very impressive, securing the game a third-place prize in Epic’s 2008 ‘Make Something Unreal’ development contest.

One key feature – making allowances for a smaller player-base – is that the player count can be padded out with bots, keeping space busy if not especially competently staffed. Aiming for a Battlefield-esque 64-player cap, you can watch some gameplay footage of a 56-player, infantry-centric match in the video below.

The 40% discount on Angels Fall First ends tomorrow, so if you find the trailer and gameplay footage above tickles your fancy, and want to try your hand at a multiplayer FPS that’s more than just your regular team deathmatch slugfest, then you can pick the game up up via Steam Early Access for £8.02/$10.79 for the next 20 hours.
{"schema":{"page":{"content":{"headline":"Genre-blending space combat FPS Angels Fall First re-launches hard and fast into 2018","type":"news","category":"angels-fall-first"},"user":{"loginstatus":false},"game":{"publisher":"Strangely Interactive Ltd","genre":"Early Access","title":"Angels Fall First","genres":["Early Access","Indie","FPS","Simulation"]}}}}