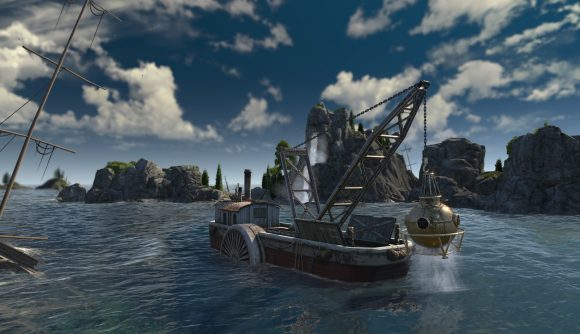 The first Anno 1800 DLC is here with Sunken Treasures, a new expansion all about teaming up with a wacky inventor to help build his gadgets. The big addition – literally – is the new Cape Trelawney map, which is triple the size of any previous map in the base game, but there’s plenty of other new additions, too.

Cape Trelawney includes 300 grids worth of coast and commensurate access to loads of natural resources as a result. You’ll be partnering up with Old Nate as new third party character here – he’ll set you up with a fancy new diving bell steam ship that will let you dig up sunken shipwrecks in order to craft new inventions that’ll help improve your empire.

In a devblog ahead of release, Ubisoft said there’ll be about six hours of playtime associated with the new storyline, on top of what you’ll get out of all the other quests, the 100 new items, and the new crafting mechanics.

Sunken Treasures is available now as part of the Anno 1800 season pass, or as a standalone release for $11.99 USD.

You can see some of the new additions in action through the trailer above. (Here’s Ubisoft’s UK mirror, if you’re hit by the region lock.)

Check out our Anno 1800 review if you’re still on the fence about the base game – in short, it’s a beautiful (if somewhat sanitised) take on the Industrial Revolution.