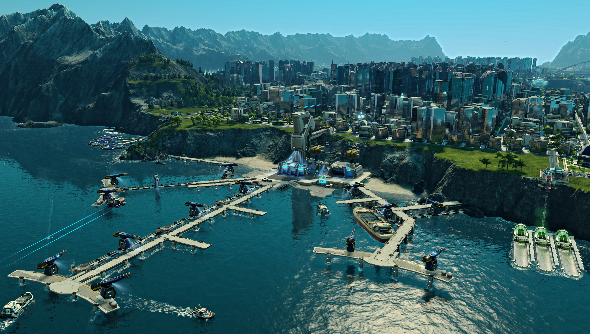 When last we saw Ubisoft’s Anno series, it had taken the bold decision to leave history behind and travel into the brave new world of the year 2070. Four years later, developer Blue Byte are looking to the future once more for their next game. But they’re also looking up, since their new game – Anno 2205 – is heading in an interesting new skyward direction.

This time, we’re going to the moon.

Anno 2205 is the biggest change in the series Blue Byte has ever made. While 2070 saw the series take on a sci-fi setting, it remained rather conservative and played much like the previous games. Anno 2205 focuses on the need to extract resources from the surface of the moon, and gears much of its systems and story towards embarking on a massive space mission to set up a mining colony. 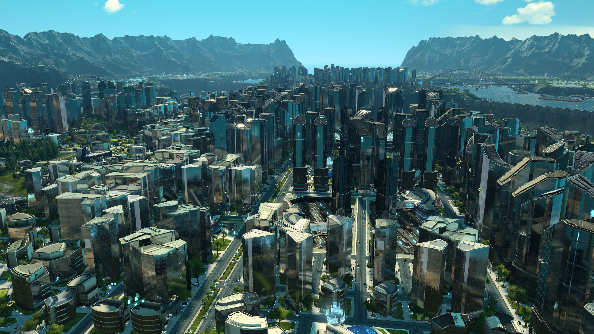 As 2205 opens, you’ll be firmly grounded on earth as you build up your corporation. As a city builder and economics management game, you’ll spend a great amount of time producing cities with farms, industrial zones, and towering residential districts. From the start it’s clear that 2205 is an astonishingly beautiful game, with incredible detail on buildings when zoomed in close, and rows of traffic made up of flying cars to create that Coruscant effect. Making this landscape is simple, and there’s been a lot of work put into the graphics-heavy interface to prevent things feeling spreadsheet-like. There’s been a heavy emphasis on making things simple and effective during development. “A trading route used to need sixteen clicks. We knew from our research that this was where we lost some beginners, so we tried to reduce that. The number of clicks that you need to create something is now much less, seven or eight,” explains Dirk Riegert, Anno 2205’s Creative Director. “All the new approaches are moving into that direction: keeping the complexity but making it less complicated.”

As you build your city empire, your economy and technology will close upon the first major goal of space flight. With a space port built you can start to ship materials to the moon, which is when things really start to open up. See, the moon isn’t your final goal. It’s merely a new resource. But rather than just building an extractor on it’s surface, you’ll need to work hard to reap the rewards. You need to set up a colony. And whilst colony building has similarities to city building, they’re two different sides to Anno’s coin. 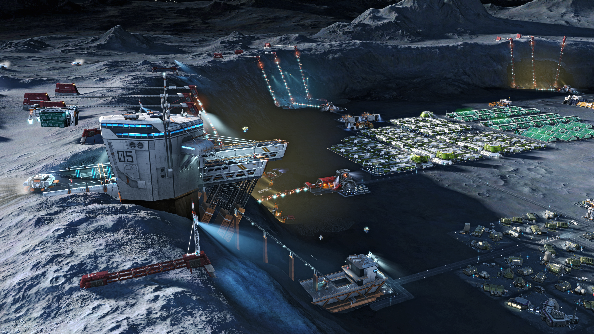 Whilst your job on earth is to keep the population happy and living in economic luxury, the needs and wants of your colonists are vastly different. Safety is their prime concern: the moon frequently gets bombarded by meteor showers, and so it’s vital to keep your entire colony covered by force fields lest it be reduced to dust. Mining the moon is also generally difficult work, so you can always make the decision to gradually replace human workers with androids.

With a moon colony established, new technology becomes available thanks to being able to transport the Helium-3 resource back to earth. But economy is vital: shipping costs from the moon back to earth aint cheap, so it’s vital to make sure your industries keep rolling. And of course, you won’t be the only one trying to make money from moon rocks. “The moon is a place that is harvested by many different corporations, so there is rivalry going on. You’re under a little pressure as people say “No this is my territory!” The story, gameplay, and look, it all changes when you reach the moon,” says Riegert.

Space travel and moon harvesting seem to be Anno 2205’s biggest contributions, but they’re eclipsed by a new multi-session approach. When viewing Anno 2205’s earth map, you’ll be able to see icons for each of the territories across the globe. Whilst these unlock as the story progresses, territories you’ve previously built up don’t become obsolete as you move onto a new area. You can revisit them at any time, and they continue to work and produce. This means your successful cities can become feeders for new settlements, allowing you to export materials to fresh locations, and even divert power from one city to another. It provides a real feeling of world domination, and also makes trade routes a massively integral part of the game.

These territories are also of a different flavour than previous Anno games. Traditionally Anno has always been about building on small islands, but 2205 goes continental. “This was something the players were always hoping for, they want to go to continents to build something really big,” explains Riegert. “We have a new engine that can deal with really big landscapes this time. So we said okay, lets try this and make this wish of the players come true.” As a result, 2205’s cities can become astonishingly huge, sprawling metropolises.

Managing those metropolises can be work, with each set of upgrades to buildings demanding more and more resources and attention from you. Yet, at least in the alpha build I got to play, there doesn’t seem to be any urgency to it. You can progress at a lazy pace, and the lack of impactful change like pollution or any significant risk-taking means there’s little chance of your whole plan going bottoms-up. This will allow unhampered progression, sure, but will a lack of challenge or threat leave players completing their tech tree within a weekend? Hopefully there’s a lot more to Anno 2205 than we’ve seen.

But even without the potential for city-wide disaster, 2205 will certainly offer much to those who want to build beautiful, perfectly-planned utopias, where your electricity is beamed directly down from the moon. Now that’s a future I can get on board with.