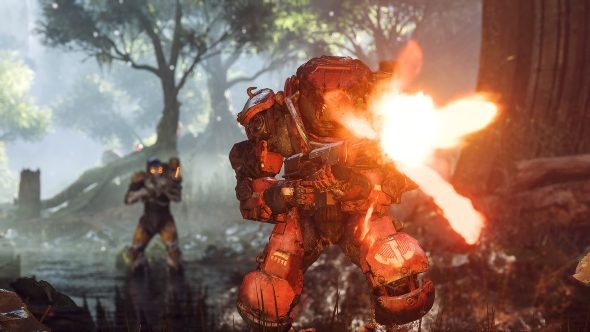 Anthem is less about who you are than the Javelin you fly in. While the co-op shooter will have a character creator in the style of previous Bioware games, most of your customisation will be sunk into the exo-suit you tailor to your playstyle.

Player personalisation is a focus for the studio, executive producer Mark Darrah confirmed on Twitter late last night. But the dev team want to provide a wealth of customisation options for your Javelin, rather than your character.

The news follows an appearance from Anthem at EA Play that revealed some of the distinctions between the game’s Javelins. A new gameplay trailer showed players flying chunky, mech-like suits, alongside others in slimline Iron Man numbers. All looked to be jet-powered and highly maneuverable in the air, despite their varying weights.

Could Anthem join our list of the best co-op games on PC?

The suits are not only your chance to make a personalised mark on this untamed world, but double as a class system. At E3, Bioware mentioned four specifically: the Ranger, Storm, Colossus, and Interceptor. Each one has its own set of strengths and abilities, and you can switch over between missions.

There will be a character creator but we are investing most of our personalization effort on the Javelins. You spend a lot of time in them and we want you to be able to make it your own https://t.co/d7eARuXgcr

Stick around to read more about Anthem’s Javelins, as well their heat management system, and the fact that Anthem has a release date now. It’s all getting very real.