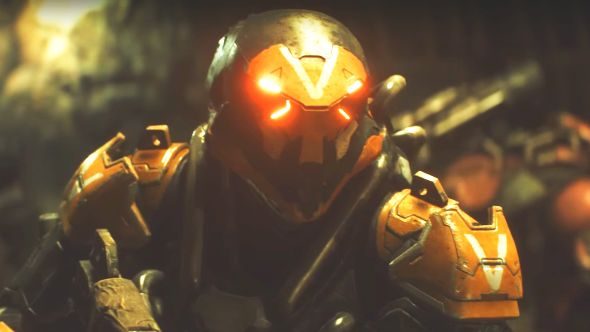 A second Anthem teaser has been revealed ahead of the game’s full trailer reveal at E3. There’s even less to go on this time around, but if nothing else, the teaser gives us a close-up look at one of Anthem’s monsters, as well as a very satisfying superhero landing.

The first teaser trailer, which you can watch below, is, as I said earlier, extremely short. In fact, it comes in at just six seconds. And three of those seconds tell us basically nothing (not that the other three are a trove of information). The teaser opens onto a shot of a cave, before turning to an apparently female (but helmeted) character.

The camera then turns on to some large structure. It looks to be made out of wood and metal, with a light source shining out of the middle of it, with more metal structures arranged around the outside. The low-tech nature of the structure suggests that this is some sort of archeological find, and, unsurprisingly, it seems it’s not friendly.

The unseen, unnamed voice of the teaser, which you can watch below, says “something is out there. It wants to destroy us all,” suggesting some big, unknowable bad within Anthem’s story.

The second teaser is cut into small clips. There’s an armoured freelancer turning to the camera, several characters flying towards the ground, that aforementioned superhero landing, and a very angry monster. You can take a look below.

Venture into the unknown and face dangers unparalleled. https://t.co/ph7JQ732g3 pic.twitter.com/txHjOSLvcj

The Anthem release date is scheduled for March 2019, but we’re likely to learn significantly more about it at E3. EA have confirmed that they’ll be showing off a new trailer at their conference on June 9, as well as more gameplay, a combat showcase, and a development panel from BioWare.