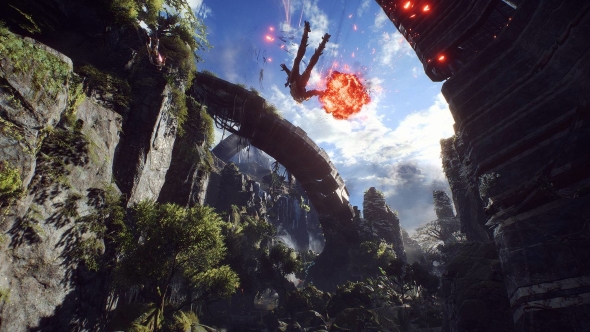 Bioware studio manager Casey Hudson has acknowledged the challenge his studio faces in Anthem, EA’s next big bet, in making the player the centre of the story while also delivering a rich multiplayer experience.

In a new blog post, Casey notes there have been questions about how to tell a story in such games, such as “what if I don’t want to play with randos?”, “what if I don’t have friends that I play games with?” and “I like to be the one making choices in my story – if it’s multiplayer, won’t the story get watered down?” Such questions were raised by the recent departure of writer Drew Karpyshyn from the studio.

Anthem’s biggest rivals will be The Division 2 and Destiny 2 – respectively, Ubisoft and Activision’s efforts to make a triple-A multiplayer hobby game. Destiny in particular has struggled with these questions, with high-end PvP and PvE activities – including raids – still feeling inaccessible to solo players despite an in-game matchmaking system, and players having essentially no agency at all when it comes to the storyline.

“I think the reason people are concerned about whether these things are possible in a multiplayer game is because it just hasn’t been solved well before”, says Hudson, in a possible swipe at those likely rivals.

“With Anthem we’re taking this problem head-on and structuring the entire game design to provide a specific solution for this. We’ll be sharing details on how it works very soon. We think it creates a unique experience where you have control over your own story, but your story is set in an ever-changing multiplayer world. And yes, even though Anthem is meant to bring out the best parts of playing as part of an online community, you can choose to play through the story with only your friends, or even on your own.”

Intriguingly, Hudson says “we also have teams envisioning future Bioware games, and they’re designing approaches that are different from Anthem – including one that’s very Dragon Age.”

Hudson concludes by confirming Anthem’s presence at EA Play, EA’s E3 showcase: “we will be showing Anthem live to fans at EA Play in Hollywood and will have lots more details to share.”

Here’s Hudson’s blog in full. Anthem was recently fixed to a March 2019 release date, but EA have hinted we’ll be able to play it before then and provide feedback that will shape the latter months of its development.