Rather than directly facing off against the two opponents at the other end of the corridor, I pop a u-turn and start running in the opposite direction. Over Discord, my teammates call out for revives, but I ignore their cries for help and press Q, the colour draining from my screen as my character, Wraith, slips into the void.

The ability means that I can go almost completely undetected by my opponents, allowing me to circle back around the building. Re-entering through a different door, I return to reality just in time to line up couple of bursts from my SMG and dispatch my unwitting enemies. I take a moment to lord over my now-humbled friends, then I revive them and begin looting our former foes, the noise of a dozen other conflicts echoing in the distance.

Apex Legends’s arrival is like nothing I’ve ever seen. Dropping in suddenly, it’s reached the final ten of the genre in no time. There are plenty of external reasons for that, of course; battle royale remains the most popular genre in the world, and Apex is built by the team behind one of the most respected first-person shooters of the past decade, Titanfall. But the surprise launch was followed by an even greater surprise – Apex Legends is good enough to not just maintain, but build upon, that initial excitement. Out of nowhere, it has single-handedly elevated a genre that many thought entirely saturated.

It’s the same concept that uncountable other titles have tried to cash in on over the past two years – players drop onto an island and battle to become the last ones standing. But Respawn supplies a few changes to the traditionally-accepted formula. Apex Legends caters to 60 players rather than 100, and limits gameplay to three-person squads. Its overnight success comes down to the fact Respawn hasn’t taken an idea and added a gimmick to it, but instead applied its own expertise to the genre’s shortcomings.

The most obvious change comes via the decision to borrow from hero shooters. Other battle royales rely on cosmetic changes to differentiate one character from another, but Apex Legends asks you to choose from a roster of eight personalities at the beginning of every match. Crucially, none of them have a major advantage over one another in terms of speed or resilience, but each has passive, tactical, and ultimate abilities which inform their wider role in a battle. Lifeline’s tactical ability supports her position as a healer, calling in a drone to automatically restore health to nearby allies. Gibraltar is a tank, his passive calling up a shield that activates whenever he aims down sights, while Pathfinder is exactly what he says on the tin, with an entire kit built around expediting his journey around the map. 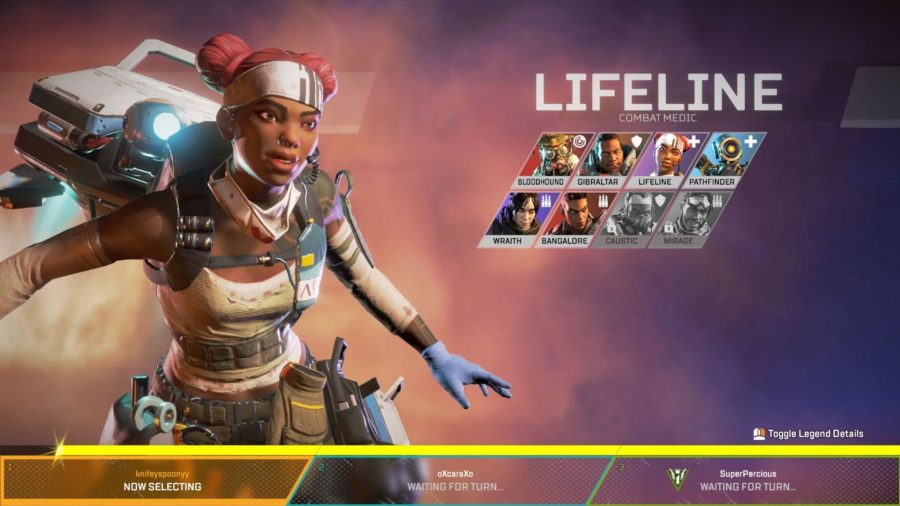 This setup is Apex Legends’ biggest deviation from the norm, but it’s a beautiful fit for the genre. The characters work alongside each other flawlessly. While you can select a trio with a particular strategy in mind, the level playing field means there’s no sense you’ll be putting your team at a disadvantage if you choose to play as the character that resonates most with you personally. The roster feeds into Apex Legends’ punchy gunplay and effortless movement to make for what is by far the most engrossing combat any battle royale has to offer.

In these electrifying battles you can never truly feel safe. An opening advantage can quickly be undone by an enemy – Lifeline’s drone, for example, or a well-placed smoke grenade from Bangalore. A tactical retreat can be followed up by an aggressive Pathfinder, while Wraith’s ‘Into the Void’ and Bloodhound’s tracking abilities turn even the most secure hiding spots into deathtraps. An otherwise deadly advance can be halted by a wall of flame thrown up by a Thermite Grenade, or by Gibraltar’s Dome of Protection. Even killing an enemy doesn’t guarantee safety, as a respawn system allows players to be brought back to life even if they’re finished off during a battle – ‘banners’ can be collected from their corpses and taken to Respawn Beacons, from which your teammates will be reanimated, very much alive but without their loot. None of these ideas are new to PC gaming as a whole, but in the context of the already-stagnant battle royale, they’re genre-changing.

Acting as a backdrop to all of this are the guns themselves, which ooze as much personality as the characters who wield them – from the irritating stings of the Mozambique shotgun to the deadly spin-up of a maxed-out Devotion LMG – and Apex Legends’ best-in-class movement (exactly what we might expect from Respawn). Everything in the game feels as though it’s done at a sprint, never really letting you slacken the pace. From the opening moments of your initial descent, a real sense of weight applies to your character.

After you pick yourself up from your superhero landing, you set off running, scrambling over walls or up the sides of buildings, skidding down slopes and flinging yourself from the ziplines that criss-cross the map. King’s Canyon is a joy to traverse, and I’m glad that Respawn has leaned into that experience. Positioning and repositioning is simple thanks to the sheer number of movement tools at your disposal, meaning that the wall of the zone doesn’t feel like a potential punishment, but a tool to facilitate the high-stakes battles of the final circles.

Those stakes are helped along by the characters themselves, who are keen to let you know when you run the risk of being caught out. In-game voice lines are so prolific that each character has lines relating to your every move, meaning you can spend time looking out for enemies rather than keeping one eye on you HUD. That shift of focus from the map serves to almost entirely remove the sense of a mid-game, an affliction affecting the entire genre as the action dips between a chaotic early scramble and a cramped late-game. 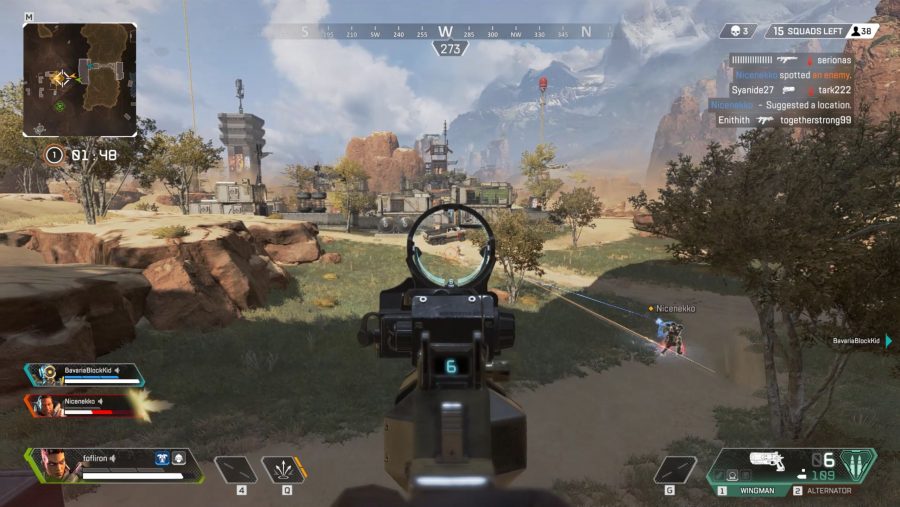 But your characters are far more than weaponised sat-navs. Everything from your next destination to evidence of enemy activity can be noted thanks to the game’s much-lauded ping system, and then brought to life in dialogue. It’s an incredibly detailed system, matching the fast pace and strategic complexity of the combat. In Fortnite and PUBG, if you can’t or won’t use a microphone, all you can do is stay close to your team and potentially suggest a new location. In Apex Legends, you can actively guide a team to victory without uttering a word.

Its popularity is great news for EA, but Apex Legends is also helping out indie VR game Apex Construct, as players are confusing the games' titles.

Irritatingly, that sense of accessibility isn’t always matched across the rest of the game, and while a tutorial is a much-needed addition to a genre that has previously relied far too heavily on its conceptual simplicity, there are still some complexities that could have been more effectively ironed out, particularly when it comes to inventory management. There’s a lot to get to grips with – healing items that don’t feel very self-explanatory, a pretty stingily sized backpack, sniper rifles that use light ammo, and a pistol that’s somehow a shotgun. It doesn’t take too long to familiarise yourself with the UI, but it was a blight on my early hours with the game.

Nevertheless, Apex Legends is a marvel, taking a genre that seemed like it could go no further and changing the game literally overnight. It’s the first battle royale since PUBG that feels like it’s been born out of desire rather than necessity – not just a desperate attempt to stay relevant, but a choice to try and genuinely improve upon a global sensation. It’s a wonderfully polished, characterful offering that marks the end of the beginning of the battle royale.

Respawn’s game elevates its entire genre, doing away with its failings while innovating upon its strengths. From out of nowhere, it’s become the prodigious new face of a worldwide phenomenon.