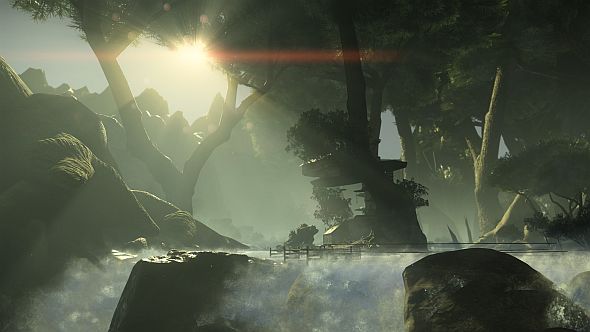 Digital retailers Green Man Gaming have unveiled the latest title from their indie publishing arm. It’s called Aporia: Beyond the Valley, it’s a first-person non-linear puzzle game, and from the look of the announcement trailer, it’s really quite beautiful.

For more imaginative classics, check out the best indie games on PC.

Aporia is set in the mystical world of Ez’Rat Qin. You awake after hundreds of years of sleep, with no memory of your past, and set out to explore the abandoned ruins of a once-mighty civilisation. You’ll delve into a darkly beautiful world, and uncover the rich story of who you are and what happened in the Valley. It’s all told without text or dialogue and with plenty of ambiguity, leaving you to devise your own interpretations.

It’s the second title from Investigate North, who previously brought us the found-footage mystery game Cloud Chamber. Interestingly, Investigate North are chaired by Ole Søndberg, the producer behind Sweden’s Wallander TV show and The Girl With The Dragon Tattoo movie.

“The writing of the story and the creation of the world of Aporia has been a real adventure in itself, but hopefully only half the adventure of playing it,” says Investigate North producer Niels Wetterberg. “We can’t wait to have players immerse themselves in the rich world we have worked hard to create. We are excited to see how players will explore, react to and interpret Aporia: Beyond the Valley.”

Aporia uses CryEngine, and has been three years in the making. For more, check it out on Steam here, or on Green Man Gaming here. There’s no release date yet (apart from “soon”), but you can pre-order for £14.99 on GMG.