April 1st is, apparently, the mandatory day that game developers produce a variety of lavish trailers and announcements for games they’re not actually going to make. “Hahaaaa!” these developers howl as thousands are hoodwinked by the joke. “They actually thought we were making [insert long-awaited sequel/remake/revival here]! What fools!”

To prevent you from being an April Fool, we’ve collected all the joke posts of the day right here in this tidy little containment post. You may want to read it to point out to your foolish friends that there is absolute proof that the game they’re convinced is real is actually fake. Or, you may just want to read it to have a chuckle yourself.

How to power your PC using only potatoes 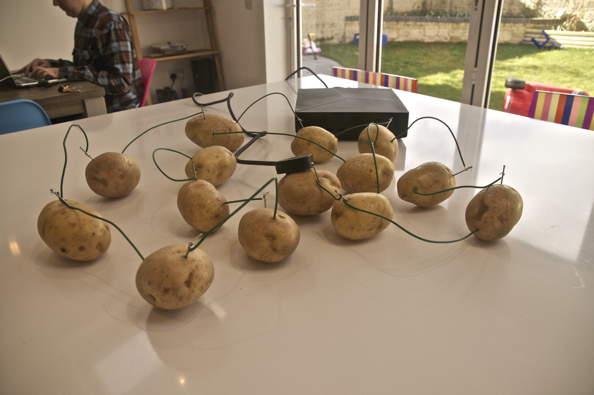 We at PCGamesN have an abiding love for root vegetables of all kinds, but particularly the humble potato. Look at it. Isn’t it lovely. Spudalicious.

But the potato isn’t just tasty and handsome. It’s also an impressive source of power. Here’s how to power your PC using only potatoes.

Warhammer Vermintide will let you bat away ratmen in Skavenbowl

Bloodbowl may be the Warhammer universe’s most popular sport, but some districts love a spot of Skavenbowl. A little like Baseball, you score runs by… well… belting a skaven in the face with a hammer and seeing how far he’ll fly.

The mode is being implemented into Fatshark’s new Warhaammer game Vermintide, allowing you to take a break from the more ferocious warmongering elements of the campaign and relax with a spot of friendly sporting action. 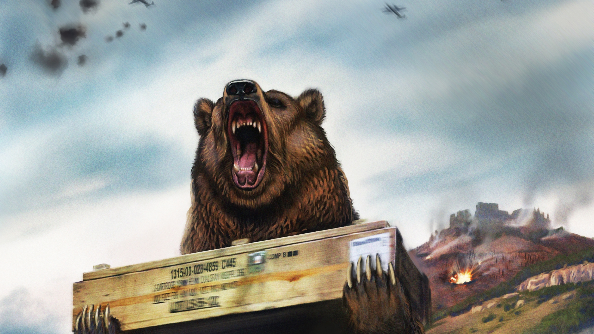 Strategy developer Nival have decided it’s about time that someone included a very special person who is oft overlooked when it comes to European modern history. Mojtek “the Soldier Bear” was an Iranian bear cub found by the Polish soldiers of the 22nd Artillery Supply Company. He helped move ammunition, and was promoted to corporal for his contributions to the war effort.

He’ll be an in-game unit in Blitzkrieg 3, helping increase the firing rate of friendly artillery and offering additional protection against hostile attacks thanks to his big paws.

War Thunder fields a Walking Tank on its battlefield 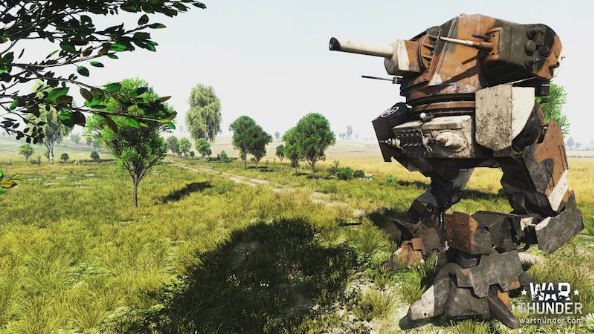 Gaijin have been granted access to a set of top secret Russian files that revealed the secrets behind the Soviet Walking Tank. Using these blueprints, the development team have added this unique armoured beast to War Thunder. The unique design allows players to walk over anti-tank traps with ease, and gain a distinct height advantage.

Players will also be able to get behind the controls of an SPS-255, the first tank with an entirely rubber armoured hull. Without any specific weak spots, this tank simply has a health bar you have to grind down. 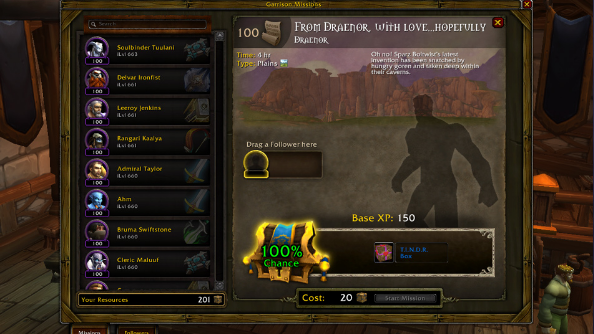 Blizzard have made sure all the latest social media phenomena is included in the latest 6.1.4 patch. T.I.N.D.R is a new Garrison feature that allows you to find your soul mate in the world of Azeroth. The T.I.N.D.R box can be given to level 100 followers like other upgrades. If a follower is successful in finding a date, you’ll gain a reward, along with a S.E.L.F.I.E of your follower as proof.

Patch 6.1.4 adds plenty more, too, including World of Warcraft: The Movie: The Game, the ability to sign a contract to be a submissive looter, and a new quest hub called ‘Terminus’ where NPC Grick Rimes will be able to help you unlock the Cannibalize ability.

See the whole set of patch notes at the World of Warcraft blog.

It looks like Rovio will never be happy with just flinging birds at pigs using a catapult. Their latest game appears to be putting Farmville right in the crosshairs, with added soap-levels of drama and some exceptionally questionable clothing choices.

Just look at those legs.

Superhot comes to Quake in the form of Superqot

1996 called. Apparently they want Superhot, the awesome FPS where time only moves when you do. Superqot is, amazingly, a completely playable version of Quake, but with Superhot’s time-freeze doo-hickey. Watch it in action in the trailer above, or head here to actually play.

And yes, there is multiplayer.

Sniper Elite gets its boogie on with Zombie Army THRILLogy

Undead-based Sniper Elite spin-off Zombie Army recently released its third game, and was bundled up with its brothers as the Zombie Army Trilogy. But Rebellion have decided that just wasn’t enough, and have incorporated motion controls for the next Zombie Army game: THRILLogy.

Put undead Hitler and his Nazi goons through all the right steps to the 1980’s most iconic pop dance routines.

Miles Jacobson, head of Football Manager developer Sports Interactive, found this rather wonderful T-shirt in the mail this morning. 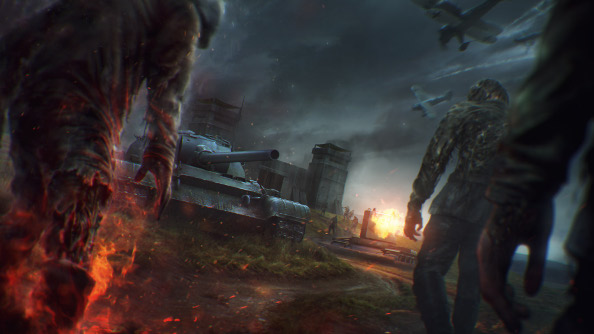 This is not a joke: Wargaming have just announced the launch of a new game called World of Tanks Operation Undead. It’s a tower defense game you play in your browser, as you array your defenses for a game of Tanks vs. Zombies.

“Inspired by the Tower Defense genre, this new angle on tank combat lets players figure out ingenious ways to fend off waves of attackers,” says a press release from Wargaming. “Strategically place tanks across three unique battlegrounds. Defend against seven different types of undead from decrepit biplanes to shambling ground troops. Use a range of tanks effective against the numerous types of zombies and harness powerful special attacks to deal the final blow.” 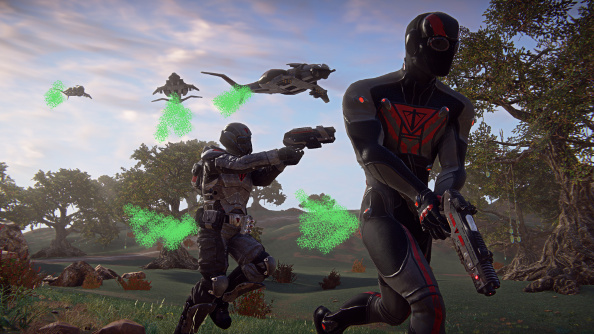 Some stuff is going down in PlanetSide 2 tomorrow as it joins the legions of games attempting to make you guffaw during April Fools, the biggest day in PR and marketers’ calendars. Auraxis has a gas problem. There’s pressure building in the bowels of the planet and everyone is being warned to keep an eye out for unusual activity.

The planet needs to fart.

Minecraft becomes a game about love and sharing, Mojang take out all the violence 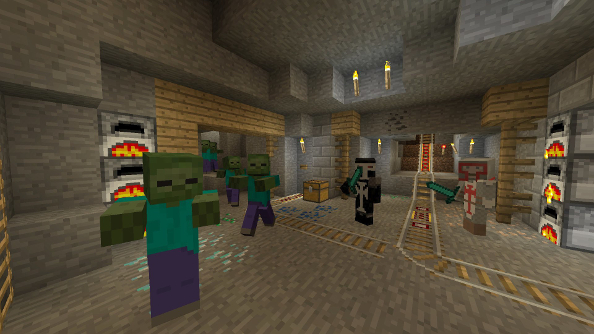 Minecraft’s latest Snapshot changes Minecraft into a game that emphasises the help we can share with one another, rather than the hurt we can cause.

The patch makes a number of changes – survival mode has been renamed ‘existence’, monsters are now ‘inhabitants’, and bats have been made 20% cuter.

There’s also a new love meter which fills up as you and other players help one another. 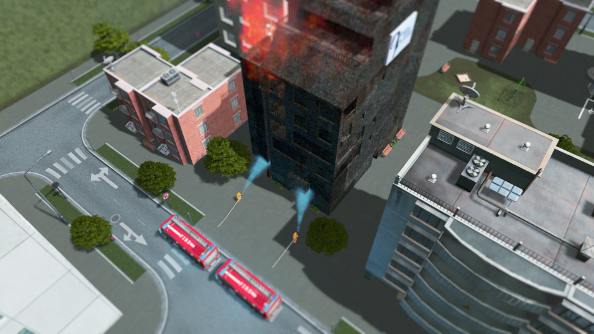 Cities Skyline’s developers have decided their success over SimCity’s beena tad unfair and so the latest patch will bring the two games closer together. As such, modding support’s been removed, a new 50 tile map’s been released for players who prefer no space to spread out in.

Apparently, as a result of Reddit’s hate of their in-game tweeting service, Chirpy, their bird tried to commit suicide. When it returns to the game it will have 75% less feathers. 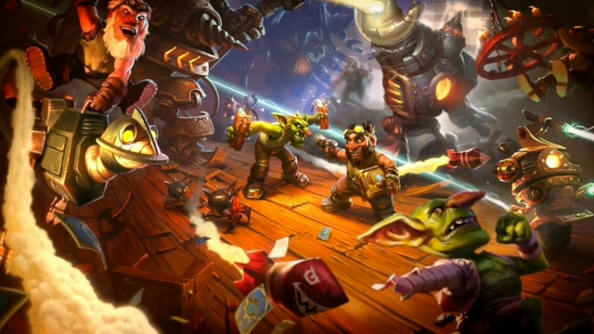 Hearthstone’s April 1st patch is full of things you’ve been waiting for. An HD remaster of the classic card back, the new ninja card (automatically defeats pirates), 1000 different hounds to choose from when you use Unleash the Hounds and finally the typo in the Anima Golem card has been fixed and it’s now correctly called “Animal Golem”.

Take a gander at the full patch notes here. 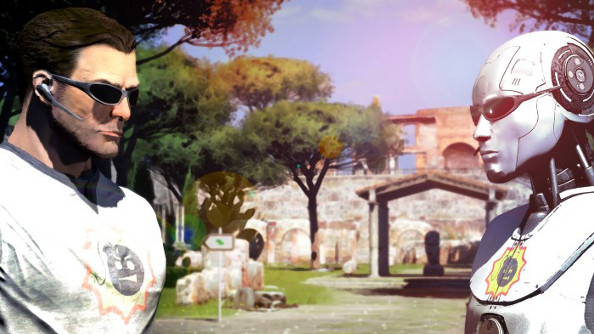 Elohim is out, Sam is in. The Serious Sam DLC for The Talos Principle gets rid of wise Elohim, replacing him with the voice of Serious Sam (John J. Dick). The voice pack is free until April 7th, while the price of the game has been cut in half.

“I knew this was bound to happen,” said Sam ‘Serious’ Stone, star of the Serious Sam series, when asked to comment on DLC pack. “It all started when they took the assets from Egypt and reused them again in this new puzzler that delayed Serious Sam 4. But hell, those crazy Croatians made me sound smart so all is forgiven.”

Heroes of the Storm’s Heroes have been getting big heads 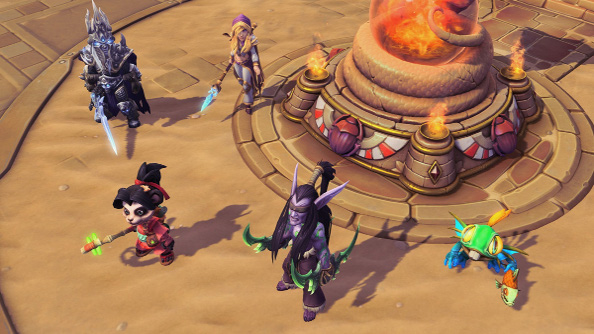 Hubris isn’t an attractive trait, and just as the wind can make your hideous face stay contorted in an awful shape, arrogance can make your head increase in size quite considerably. The Heroes of Blizzard’s Heroes of the Storm know this only too well, as they are now sporting gargantuan noggins.

Don’t you just want to cuddle Arthas? What a cute tyrant he is. And keep an eye out for future features, says Blizzard, like the Mini-Mount mode.

A dodgy batch of Antizin has caused some unexpected, 24-hour long side effects in Dying Light.