When a new MMO update is called Maelstrom, you can safely assume a big shake-up is coming. For ArcheAge, that means revamped crafting, open-world raid finding, and more flexibility in equipment than ever before.

Related: the best MMOs on PC.

But of course, this being the pirate MMO, there’s no reason why that maelstrom can’t be literal either – as in the stormy 20-player ship battles of Bloodsalt Bay, ArcheAge’s first ever PvP naval arena. 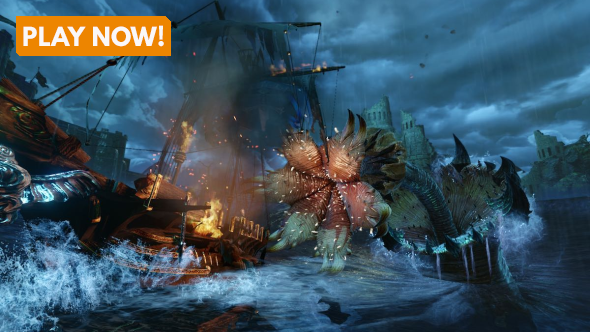 ArcheAge has always been at its flag-billowing finest in PvP, and the Bay brings a whole new format to 20-player battles. This evocatively named setting is no holiday destination, but a nightmarish section of churning seas battered by terrible storms. The real struggle, though, is with the dangers below the surface – creatures of the deep with more teeth than they know what to do with.

You’ll have a kraken time (so sorry) at the helm of your own ship, guiding a crew of five to face off against the monsters. Meanwhile, three other crews fight to take the treasures too, making these very busy seas indeed.

The ships you take out into the Bay are purpose-built, meaning there’s no advantage to be found in character skills and abilities – instead, only the steeliest navigators and commanders will come out on top in PvP. You’ll need to work closely with your crew, firing cannons, dropping the anchor, and raising masts, all in aid of rescuing the most souls over a 12 minute match.

Perhaps there’s something else out there as well: is that the wail of the wind, or the undead?

The magic of Obsidian 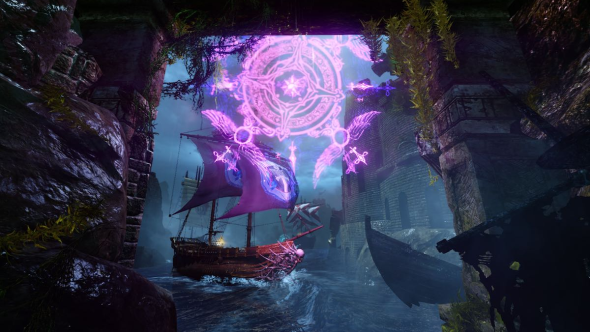 Obsidian is the most magical material in PC gaming – the stuff of which great RPGs are made, and a coveted, volcanic block in Minecraft. In ArcheAge, Obsidian gear is stuff worth upgrading – and Trion Worlds have made that process far more freeform.

When upgrading any Obsidian gear up to tier five or six, you can use a Spellshift Orb to turn that item into a component for the next tier recipe. That component then becomes an unequippable crafting material and – bear with me – after crafting the next tier, transforms into a cloaked item.

Cloaking is ArcheAge’s way of giving you a choice in how your item turns out. When you uncloak your item, you get to pick one of two paths for it to go down. The idea is that you can more easily change your focus, or craft gear to suit a particular buyer. And in the process, get richer. Which is what being a pirate is all about. 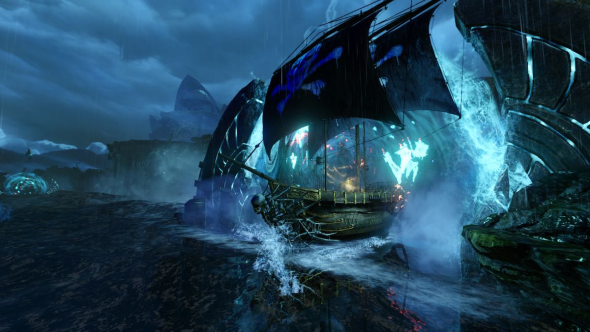 Show me a pirate who doesn’t like jewels and I’ll show you a liar in a fancy dress costume. Lunagems go down particularly well among ArcheAge’s seafaring classes, because they can be slotted into gear for boosts to their stats. But the process has previously had a percentage chance of failing, breaking the gems and upsetting privateers everywhere.

With Maelstrom, the risk has been taken out of gem socketing – allowing you to slot a stone into a weapon without fear of an expensive explosion. Lunagems are colour coded for ease of use, too: red ones for offense, and so on. Now you just pick a colour, uncloak the gem, and choose your stat increase. No more Break Gems at Tiffany’s (really, really sorry). 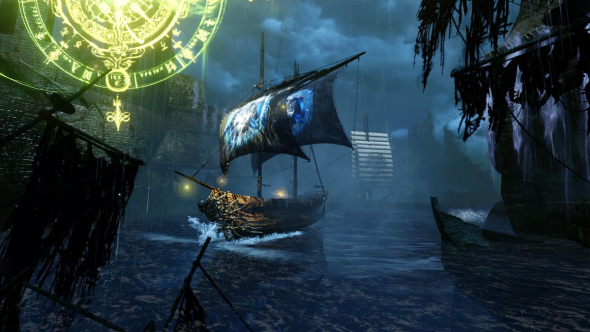 Who said the village notice board was dead in the age of the internet? Trion Worlds have installed a Raid Recruitment Board in their MMO. If you are looking for suitable allies to help weather a particularly gruelling mission, you can simply post an advertisement – a little like the newspaper ads that bands were formed around in your dad’s day, only for pirates.

You can set the time you are intended to set sail, the number of sailors needed, and the target you are going after – maybe the Red Dragon or Thunderwing Titan raids; perhaps the faction war in ancient Mistmerrow. Applicants can be reviewed before accepting, just in case you don’t like the cut of their jib or shape of their beard. And it’s possible to chat about respective roles beforehand, to avoid any confusion about who’s manning whose crow’s nest.

Sometimes, though, you find a raid requires more manpower than expected. Rather than pressing some more of the king’s men into service, real-life pirate style, you can simply use the new co-raid system to sync up two raid groups. Each raid keeps their own leader, but one becomes the Commander, and the other the Admiral. It’s tough to get upset about either of those titles.

Maelstrom is now live. Visit the ArcheAge site to sign up for free and discover Bloodsalt Bay for yourself.