Murdered: Soul Suspect is a videogame about a policeman who gets pushed out of a window, dies, becomes a ghost and then sets out to solve his own murder. He can’t be seen or heard by the living, but he can possess people to hear their thoughts and, in some cases, influence them to do or say things using telepathic ghost powers.

It’s interesting being a ghost! So I spoke to the experts what made this game, two men called Matt Brunner and Doug Van Horne from Airtight Games, all about ghosts and what if they were real.

Doug Van Horne: Have you?

MB: What did they say to you?

DVH: Well nothing, it was just rummaging around in my basement.

PCGN: Matt, can you tell me about the time you saw a ghost?

MB:Okay, sure. I was living in Austin, Texas in what’s known as a “shotgun house”, which are these houses that are long and skinny and you have to walk through each room sequentially to get to the next one. This house went: living room, bedroom, then kitchen.

Late one night I woke up in the middle room, in my bed, and noticed something strange at the foot of the bed, at the end of the room. I remember sitting up in bed and waking up, focusing on it to get a better look. Right there in front of me, there was a man standing in the doorway. I clearly remember thinking “well, there’s a man standing in my doorway”. But it didn’t scare me, it wasn’t a “holy shit, somebody’s broken into my house” sort of feeling. It was just a guy standing there.

He started walking towards me and we made solid eye contact. As he walked by I could see him staring directly at me, and as he walked by me laying in bed I tracked with him. He walked on past the bed and into the kitchen. I remember thinking, “what was that?” as I got out of bed to follow him into the kitchen. The guy was gone. So that was my ghost experience. 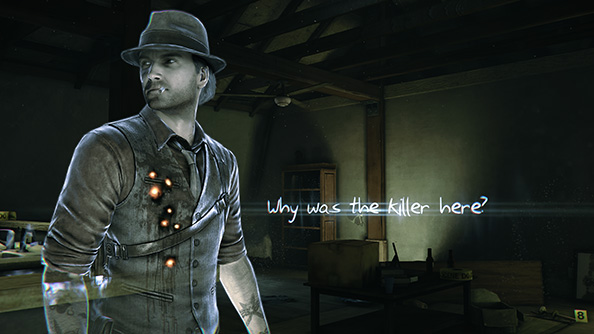 PCGN: Doug, what about your ghost?

DVH: I think I’ve heard a ghost, I’ll put it that way.This was about, I don’t know, 15 or so years ago, back in my college days when I’d started dating the woman who would become my wife and then my ex-wife. Now, her father had passed away about two months prior, and we were both staying at her parents’ house. One night, we were all in bed. I was sleeping in a spare bedroom just off of the master bedroom where my ex-wife and her mother were sleeping. Her sister was asleep in her bedroom down the hall. We all exchanged this exact story when we woke up the next day.

So we’re all just laying there, the house is dead quiet, like eerily quiet, and all of a sudden we hear a door in the basement open. Now this was a very obvious, unmistakable sound. It was a very heavy glass door. When you heard it sliding through its track you knew that’s what you were hearing. It was a sound we recognised.

The basement had two doors, an interior one and another door past that one leading into the basement proper. The interior door was locked and had a pole at the bottom so that the door couldn’t be opened even if it’s unlocked, as a security measure.

We heard, and I mean everybody, all four of us at the same time, we heard both doors open all the way. The first was strange, but when we heard the second door open into the house, everybody froze in place. We were all scared to death. Just petrified. We didn’t want to get up to see what was happening. When we talked about it in the morning I went down there to check it out and the door was back to where it was.

It was the weirdest thing, there was no evidence that the door had opened, but we’d all heard precisely the same thing, we all recounted the same stories so it’s not like we were dreaming.

As we all sat around trying to figure out what it was, her mother something along the lines of, you know, “maybe it was your dad coming to visit us, to make sure we were okay”. But yeah, you know, it was the scariest thing. That’s my closest experience to a ghost story. I haven’t seen a ghost but I’m pretty sure I’ve heard one.

PCGN: Those are both really scary ghost stories.