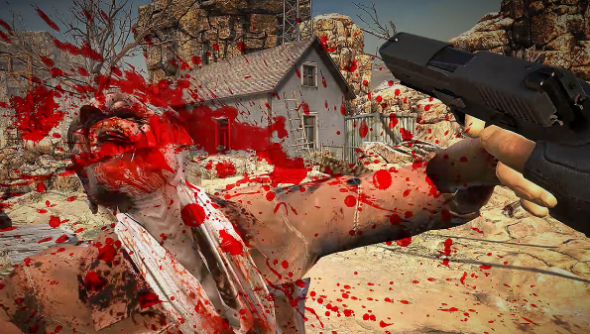 Well this was inevitable. Everyone loves a good zombie game, and VR seems the perfect platform for scaring the bejeesus out of people. Slam the two together, and you get a zombie outbreak survival shooter, beamed straight into your eyes. It’s called Arizona Sunshine, and it’s the work of Dutch indie Vertigo Games.

Arizona Sunshine is described as ‘room-scale’, which presumably means it will take full advantage of HTC Vive’s ability to track a player’s movement through 3D space. Basically, to run away from the zombies, you’ll have to actually run away.

You’ll need to “bash, slash and explode your way through hordes of undead close enough to touch,” using “motion-controlled weapon handling that will have you anticipate attacks, carefully manage your ammo and consumables, and aim down the sights.” Quite the physical experience, then.

The game will be split into ‘bite-sized chunks’, making it sound a something perhaps a bit like Time Crisis or other arcade shooters. Presumably this is to make sure you can easily come out of the experience if VR is all a bit too much for you.

It’s a bit early for a release date yet, but follow the team on Steam or the Arizona Sunshine website.