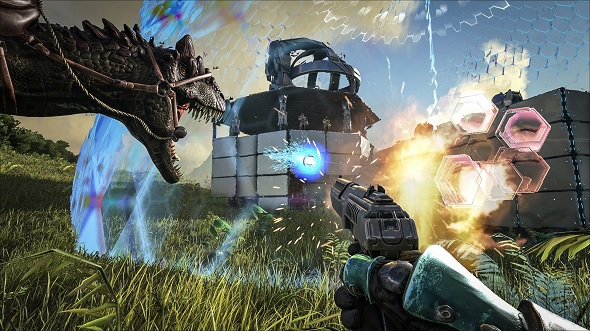 If you’re not one of the many thousands of people already playing Ark: Survival Evolved then we feel bad for you. It’s been popular during its time in Early Access, with people taming, riding, and slaying dinosaurs for months now, and you’ve been sat there not doing that. You poor thing.

There’s more to the survival-based game than mounting a few reptiles, though. We say as much in our Ark: Survival Evolved review, praising the game for its capacity to generate wild and wacky anecdotes that you can’t wait to tell everyone you know. But all of that is best found out for yourself.

That is why, being the lovely people we are, we’re giving away 50 Steam keys for Ark: Survival Evolved. If you win, you’ll no longer have to be the person in your group of friends missing out on all the shooting, cooking, and crafting. We can help you out this much, but don’t expect any help once you start off in the game’s world, naked and freezing, with no idea which direction to head in – you’ll have to figure that out yourself.

To enter our competition and be in with a chance of winning one of those Steam keys you’ll want to enter via the widget below.Every action you complete is worth one entry into the giveaway, and the more actions you complete the more chance you’ll have of winning. We’ll also need your email address so we can send you a code upon winning – we won’t send you spam, we promise!