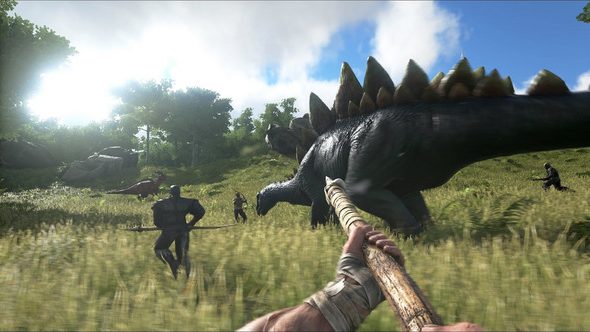 Good news for players of Ark: Survival Evolved: there’s been a huge update, allowing you to use a deadly harpoon gun, a motorboat, or an interactive toilet. All are, of course, very useful when killing and taming an array of vicious dinosaurs.

Check out more of the best survival games here.

Ark already allows you to breed, hunt, and even ride wild dinosaurs in an active ecosystem, and this new update has built on that foundation.

The v258 patch means that the game will now give you a ‘refreshing’ buff with an experience boost every time you use the bathroom – not bad for a quick break from you daily hunting and gathering duties. As well as this extremely civilised addition, the latest patch introduces five new prehistoric creatures, bringing the game’s total up to 100.

Other highlights include more explorer notes, UI changes, and two new hairstyles. So now, even when you’re getting chased by a Hyaenodon, you look your best.

Developers Studio Wildcard are keeping players up-to-date on their Twitter. Even while it’s still in Early Access, this game is looking to be promising.