Wildcard Studios have told us they won’t be wiping Ark: Survival Evolved’s servers ahead of launch on August 8. Instead, the legacy servers, which have been plagued for months by players exploiting bugs to duplicate items, will continue as before. The studio will also spin up hundreds of new servers at launch.

If you’re excited about Ark’s impending release, you should take a look at our Ark guide.

This is all in line with a statement Wildcard co-founder Jeremy Stieglitz made on the game’s Steam forums back in 2016. In it, Stieglitz says, “Here is the final word on the matter: we will not be wiping the official servers on Ark’s release.” However, that original plan wasn’t always going to be stuck to.

Just yesterday, Stieglitz called us to say that he and the team had, in fact, decided to wipe the servers ahead of the launch.

He told us the plan was to take a snapshot of the servers today and release the save state online for fans who wanted to continue the legacy servers on their own, while Wildcard wiped its official servers on August 8.

“We had hoped to make it all the way to the full release of the game without wiping the servers, but it just wasn’t meant to be,” Stieglitz told us yesterday. “We had a good run with these servers, but there have been some serious technical issues over Ark’s lifespan that ultimately made them [not work] for the next phase of development. In particular, there’s a lot of rebalancing and bug-fixing that’s going to impact the game in positive ways, and make some of the issues go away.”

The main driver behind the decision to wipe the servers was item duplication. “There’s been a lot of item duplication issues in the last couple of months due to some aggressive hacking tactics that very skilled players have been using,” Stieglitz explained. “We’ve been biding our time and monitoring how they’re achieving this, closing some loopholes.

“It’s a wide variety of techniques, but the bottom line is that we’ve got solutions for all of the [problems]. It’s not an easy thing to address what has already transpired and make it fair for the new players that are going to be coming in on the full release. We can’t get rid of all the Legacy items that people have created with those techniques.” So, rather than have players enter an unbalanced server, the decision was made to start it over again.

However, after our interview, according to a press release from Wildcard, Stieglitz and the team had second thoughts: “we at Wildcard had made a decision to wipe the PvP servers in order to clean up the ‘duped’ items which have been infesting Ark’s servers as of late. However, after further conferring with the various designers and community managers at Wildcard, and reviewing more pro-and-con debates among Ark players, and talking to the press more in detail about it, we’ve decided to stick to the original plan and not wipe: to reiterate, there will be nomass server wipe for Ark.” 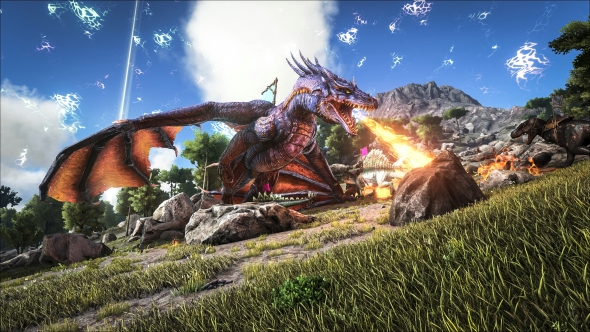 Speaking to us today in a second interview, Stieglitz says “After we talked, I went back and spoke with the rest of the dev team and we also talked to our community support folks and some of our playtesters, who are all actual players. […] We felt that we could satisfy both sides of the coin if we just spend more money.”

Yesterday, Stieglitz had said this wasn’t possible: “We can’t have an infinite number of servers,” he told us. “The servers are pretty expensive. Honestly, we spend hundreds of thousands of dollars a month on servers. It wouldn’t be possible for us to retain all Legacy servers and also put up new ones. You might say ‘Just keep some of the servers up’. Well, the problem is whoever doesn’t get their server retained is going [to be angry]. It wouldn’t be fair to anybody. We can’t host an infinite number of servers, and I think we have a good lock on ensuring no item dupes and any of the other techniques at the full launch of the game.”

Today he returned to that, saying “I discounted that idea when we talked previously, we discussed internally and said it’s not viable due to cost and scale but it is if we are a little more aggressive about offlining servers that no one plays on anymore. And there are some of those servers. There are some servers that have virtually zero player count and have for some time. We estimate it’s about 10%.

“Furthermore, we’re going to keep doing that in the future. Every six months or so we’ll do a ‘These servers are marked for death’ notification.”

Players shouldn’t worry about this, however. If they are on a server marked for death they can use the cross-Ark system to move their character to another server, taking with them all their gear and dinosaurs.”

By offlining empty servers, Stieglitz is confident that the cost of all the new servers won’t be too much of an expense.

He also thinks that the problem with duplicated items on the legacy servers will become less of an issue in time. “Over time, some of the crap that happened on them will be wiped off,” Stieglitz says. “Not by us, but by players naturally fighting it out. There won’t be any duplicating going on on those servers, at least not if we have anything to do with it. Eventually, all these ill-gotten gains will be used up in conquest. And if people stop playing them entirely then, of course, we have the option to mark them for death down the line. It’s certainly going to cost us more money but we keep it in perspective of what’s better, saving money each month or making our players happy.”

So, no, Ark won’t be wiping its servers on launch. It will, in fact, be getting plenty of new servers.