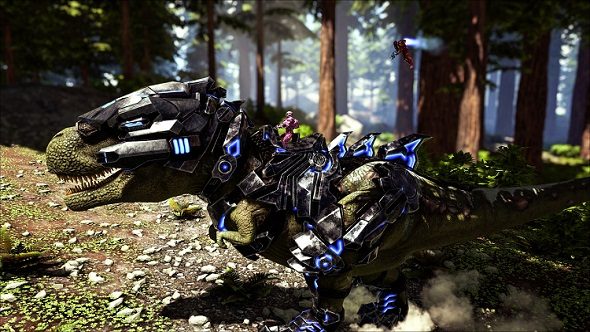 It’s a far cry from the days of bows and spears. Studio Wildcard have announced that the long awaited Tek Tier patch for ARK: Survival Evolved will be releasing tomorrow on January 30. This high tech update sees the addition of various powered armours, craftable through the special Tek Tiers.

For other survival games, take a look at this list of the PC’s best.

These items will turn you into a sort of prehistoric Iron Man, with items like the new Jetpack letting you boost around the world while the Tek Boots negate all fall damage and allow you to powerwalk up cliffs and slopes without breaking a sweat. Tek Vision allows you to spot enemies, friendlies and dinosaurs in the light and in the dark, with the new Tek Rifle also getting a night vision mode, as well as a high powered scope and the ability to shoot lasers. With this patch, you can now ride an armoured dinosaur while shooting lasers from its back, which is something we should all strive towards.

There are even special Tek Pants, which increases your running speed and the Tek Gauntlet which increases your punching power. If these gadgets aren’t ridiculous enough for you, you can also craft a special lance so you can joust other players on the backs of dinosaurs. Expect dinosaur jousting to be the next big eSport, trust me.

These Tek Tier items are designed for the end-game, as they require a special material called Element which only drops from high level bosses. Each boss in ARK now has three separate difficulty levels, with these different levels dropping different loot so there is some incentive to go back and fight them again.

On the mundane side of the spectrum, the Tek Tier patch finally adds sheep into the game, as well as facial hair which grows in real time. Expect some kind of crazy nuclear powered laser razor to be a future Tek Tier item.

According to creative director at Studio Wildcard Jesse Rapczak, the Tek Tier patch “kicks off the final stretch” of ARK’s development, with the full release scheduled for some time in 2017. Rapczak also teased that ARK may be adding underwater content sometime in the future, so expect megalodons with laser beams attached to the heads appearing later this year.