Living up to its name, Ark: Survival Evolved is, well, evolving today as the second expansion pack has arrived. Called ‘Aberration‘, it adds a new storyline that forces you into an underground cave biome in order to hide from the dangerous sunrays that have irradiated the Ark’s surface.

You can expect to find all manners of new horrors and environmental dangers underground. The intense radiation has led to genetic mutations, so that dozens of never-before-seen creatures can be fought and tamed, including the camouflaging Rock Drake and the Basilisk.

The most harrowing of these new additions are the Nameless. These are unrelenting, Element-infused humanoids that have evolved into light-hating creatures. But there are also friendly Lantern Pets that will help you navigate the cave’s darker areas. Plus, the massive Cave Crustacean can be used as a tool, grabing and tossing multiple creatures at once.

There are also Reapers, which are massive alien monstrosities that can impregnate other creatures to spawn their offspring. You can even let the Reaper Queen impregnate you so that you get your own vicious Reaper child to tame.

Luckily, there are also 50 new items to craft, including ziplines, wingsuits, hazmat outfits, charge lanters, flashbangs, batteries, glowsticks, railguns, and cave-climbing gear. You will want to learn advanced engrams, too, and gather new resources such as fishing baskets and gas collectors to fortify your home. You’ll need it all if you are to survive the tough challenges of this new Ark environment.

Ark: Aberration is now available to Season Pass holders or can be purchased for $19.99 if you own the base game. 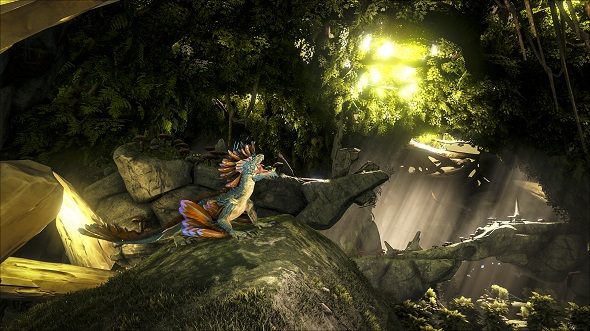 However, we have 50 Steam keys for Ark: Aberration up for grabs right here so you don’t have to pay a penny. But, remember: you do need to own Ark: Survival Evolved to be able to play Ark: Aberration. If you are elegible and want to be in with a chance of winning a copy of the expansion then you can enter the competition via the widget below.