Survival games are clearly onto something: they’ve captured the imagination of enough players to constantly be host to thousands of them each and every day. Part of the appeal is almost certainly the freedom they allow. Within those worlds, anything goes.

Fancy fending off danger and starvation right now? Try one of the best survival games on PC.

But what about the players who just don’t enjoy the lack of rules? There’s absolutely no direction in survival games, and that can leave you with the feeling that anything you do in them is just time wasted.

I don’t think this has to be the case. Just the smallest amount of direction could help broaden the appeal of survival games and invite new kinds of players to their worlds.

To be clear, I’m not suggesting that survival games change their identity just for the sake of a few people who ‘don’t get it’. I’m suggesting an alternate mode. Like how many survival games have PvP and PvE servers to mildly adjust the approach, I think games like DayZ could benefit from having servers that have goals for players to accomplish. 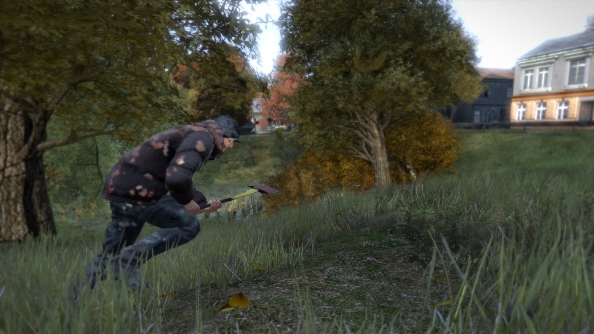 Problem: There’s nothing to do but annoy other players
Solution: Give everyone a mission to keep them busy

Have you ever played Dead of Winter? It’s sort of like a survival game in boardgame form. There’s zombies to fend off, alliances to me made, and items to scavenge. But it has a system that I think could be easily transformed into a great mechanic for DayZ: goal cards. There’s two variations: one for individual players, and another for the group as a whole.

Now imagine DayZ with this kind of system: each time you spawn on a ‘goals’ server, you have a card on your inventory page that has a simple aim. Perhaps it’s to visit one of each major landmarks. Maybe it’s to craft a specific item that’s vital to your character’s backstory. Or, to add in a little spice, it could be a psychopath card that tells you to take someone hostage and force-feed them bleach.

Actually doing those tasks is entirely up to you, but completing them could add a little badge of honor to your profile. You can imagine now people playing through multiple lives, racking up badges to show off.

On top of that, a server-wide weekly group objective would add another layer to the game. It’s also the sort of thing that would discourage the kind of mass-killing, suspicious nature that’s become commonplace in DayZ. If everyone was working together for a common goal, there’s a better chance that people would be civil.

Not too civil, of course. A lot of DayZ’s drama comes from players disagreeing, and it would be fun to see the playerbase divide into factions based on how people believe certain goals should be achieved. That’s what could lead to the real Walking Dead feel that I believe a lot of people want from a zombie survival game. 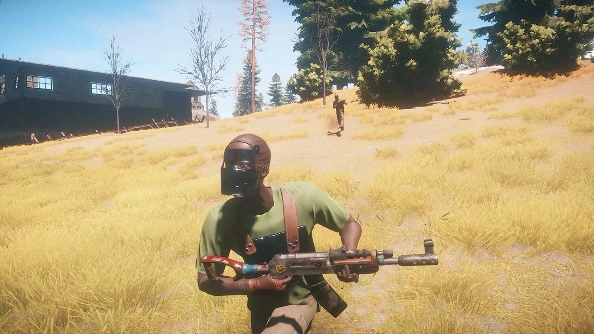 Problem: Everyone’s suspicious of everyone else
Solution: Force people together to build something strong

Rust is very similar to DayZ in many ways, but the whole ‘early man’ element sets them apart. The barren environments are just waiting for society to birth itself. As such, if Rust were to have goal cards, they should be focussed on emphasising the achievements of groups.

An idea would be to split the server into two teams: blue and red. Your card informs you of your team, and your character’s clothing colour matches accordingly. The idea is to gain dominance of the server and birth a community through the mass collection of resources, building of fortresses, and warring with the opposite team.

The freedom of Rust means this can be as reckless or peaceful as players like. I’ve seen Rust servers populated by towns with shops, prisons, and bars, and the idea of building a nation clearly appeals to a lot of people. Adding a little competition for a ‘who has the best town’ element seems a natural direction. Then it’s up to players how they want to interact with the opposing clan: start diplomacy with trading and sharing, or ransack the place and seize their constructions. There’s even opportunity for some EVE-style subterfuge by infiltrating the other clan’s zone by stealing and wearing their colours. 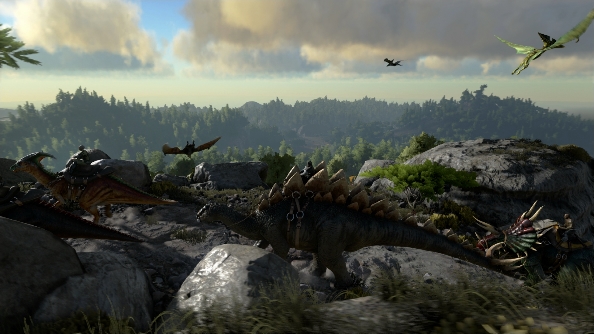 ARK is a game with dinosaurs in it, so there’s a very obvious direction here: Jurassic Park. A server-wide goal of using the game’s incredible crafting system to build a series of zoo enclosures to house every dinosaur in the game seems nothing short of logical. A stats tab on the menu that tracks what species of dino have been captured and how many of them would gently guide the server towards their main goal.

If that doesn’t appeal, the idea of dinosaur collecting can go in another direction. Gotta catch ‘em all was Pokemon’s motto, but it doesn’t have to stop at Nintendo’s collection of electric mice and walking plants. Most players in ARK are looking to find and tame all the dinosaurs in the game, but a server where that’s the explicit reason would hopefully prevent all the survival problems that go on inbetween that goal. No one wants to be killed by a griefer when you’re trying to convince a triceratops to join you.

With a collection of dinosaurs under your belt, why not engage in a player-run dinosaur battle league? Fight your way to notoriety on a server leaderboard to prove you really are the very best; a true dinosaur master. 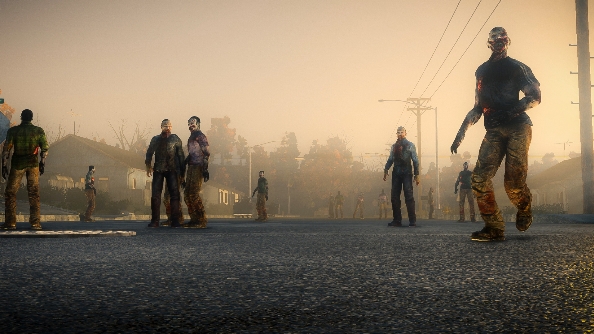 Problem: It’s the same as DayZ, so pretty aimless
Solution: Search for a cure

The problem with all these zombie survival games is that they’re set right at the end of all hope and there’s no way out. While stories like The Walking Dead have popularised the idea of just accepting this fate, traditional zombie stories focus on finding a cure. So why not make this the goal of an entire server?

Servers participating could have a central hospital building that’s a safe zone for players to stockpile medical supplies. There’d be a required amount of ‘generic’ healing gear, but the key to the cure comes in several special, one-of-a-kind items that are randomly hidden in the world. Upon finding all the items and a blueprint to help craft the item, you cure the plague and the server is reset. Being part of the effort could gain a badge of honor for some bragging rights. Perhaps, with H1Z1’s microtransaction system, there could even be a bit of a currency reward for aiding in the cure creation, too.

Do you think survival games could do with some optional goals? Share your ideas in the comments below.