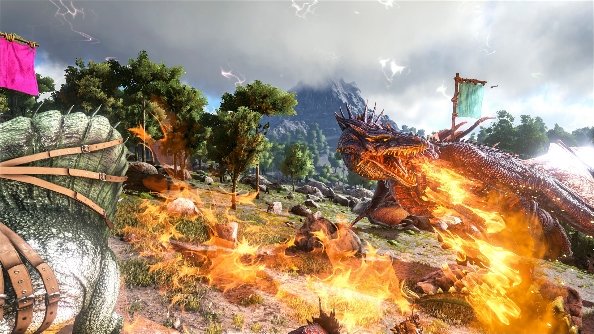 Free-to-play Ark spinoff, Ark: Survival of the Fittest, has been taken down and instead placed as a mode inside the main game. The free-to-play battler originally began life as a mod, but the Studio Wildcard decided to spin it into a full project. However, the developers say they “just aren’t cut out for free-to-play mechanics”.

Luckily, our list of the best free PC games is busting at the seams.

All major updates on the game mode are now on hold, at least until the size of the development team is increased. However, if optimisation work on the main game paves the way for performance updates for the mode, those will happen.

“It is very important for us to see how SotF progresses and we want to make sure we’re making the right choices,” Studio Wildcard explain in a Steam post.

“We understand that these changes are quite big and will impact the future of game, but hope you can understand our reasons to do so and will continue to support the game mode you love.”

In its previous form SotF was a free-to-play game without microtransactions, yet it was still costing the studio to maintain, hence the cancellation.

“When a game like SotF is made free to play, there are still expenses,” the developer explains. “This can range from development work, server costs, running of tournaments, prizes and of course the opportunity cost.

“To ensure that SotF would remain a success and a sound choice, Wildcard would have had to put a lot of resources and time into learning how to become a ‘free-to-play’ developer. We would have had to learn how to monetise a free game, notoriously through the use of in-app purchases such as skins and other cosmetics.

“Ultimately, it’s clear this is not who we are, we like to make games, and to make the gameplay fun. We don’t know much about monetisation, and quite frankly we aren’t interested in hiring an economics team to take over that process, it is much more in our and your best interest for Wildcard to solely focus on the development of a game.

“We just aren’t cut out for free to play mechanics. With SotF being part of Ark: Survival Evolved, it’ll be able to draw from Survival Evolved resource pool directly, and enable us to continue operating the title.”

While some might be disappointed, it’s easy to see why Studio Wildcard went down this route. It was only ever meant to be an experimental thing, but it kind of spun out of control. Now it’s a nice extra mode for Ark players to get stuck into.