Arma 3 is an advanced military simulator with accurately simulated ballistics. This game’s super-realistic bullets are affected by wind, the rotation of the Earth, the gravity of the moon and the proximity of any nearby beehives, with their billions of tiny turbulent, buzzing wings creating invisible eddies through which your round must twirl and cavort. It’s more than just a decent bullet simulator however, it incorporates all aspects of army life, from flying helicopters to firing mortars and shooting mounted guns and scuba diving into enemy bases.

It’s available as a paid alpha right now, if you’d like to see it in a half-built, half-dressed and quirk-addled state. I dipped a toe into Arma 3’s waters and found a turtle. Wanna see?

The Arma 3 alpha comes with an obtuse mission editor, four single player “showcase” missions and full access to multiplayer as it presently exists. The showcases are each brief tutorials on the main features of the simulator: infantry combat, underwater diving (new to the series), vehicle handling and helicopter piloting. The mission editor is hard work if you don’t know what you’re doing — if you haven’t felt utterly patronised by what I’ve written so far, then it’s probably not for you or me. The multiplayer, on the other hand, seems to be where the all the fun is happening. Online, custom made missions can be shared by up to 64 players, so it’s here you’ll find the most variety in the alpha. Indeed, seeing as all of the showcase missions are set in daylight, it’s the first opportunity I had to experience the excellent cloying darkness of Arma 3’s new, ink-blank night-times. Just look how much you can’t see, it’s incredible how far technology has come. 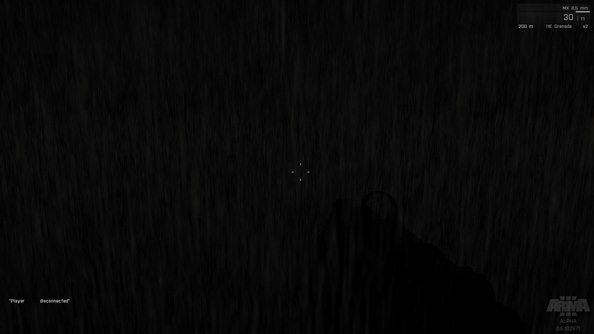 It’s raining here. It’s raining very slightly luminous rain, which allows me to pick out the faint outline of my gun and determine that the game has actually dropped me on the island and hasn’t spawned me as some sort of cave worm (which it probably could, the last game let you play as a chicken or a goat). Because it’s so cloudy, it’s impossible to find the moon or any such point of reference in the sky by which to orientate myself, so I spin around. Turning three hundred and sixty degrees reveals no sign of life, no flicker of light to start trekking towards.

I’m standing somewhere in the middle of a field, presumably, with the airy hiss of rainfall all around me. I start pressing random keys in search of my torch. Some keys seem to make my soldier shuffle about in the darkness. I make a note of these keys in case there’s a dance off in a later mission. 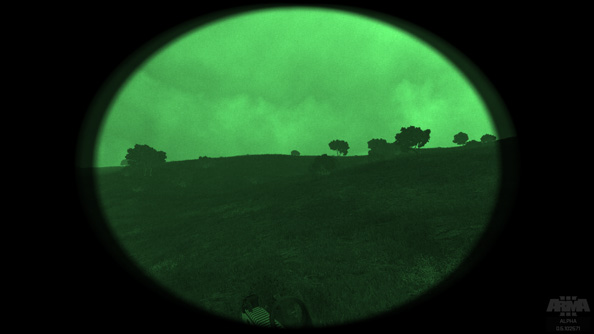 N switches vision modes, if you’ve got nightvision equipped. It also makes you feel like you’re a ground burrowing submarine peering above the surface with a periscope, or like you’re at the end of a Looney Tunes cartoon. Either way, the scenery is exactly what I expected it to be: the unmistakable grassy hills and sparse trees of every military simulator I’ve ever played, except fractionally more detailed this time. I run to the top of one of the grassy hills in search of civilisation or, failing that, a man to shoot. 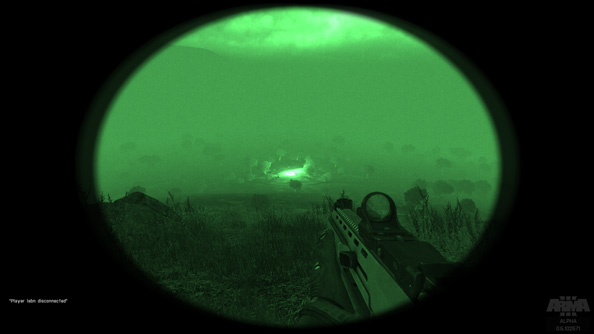 I find a campsite and the distant fire bleeds a white hot glare on my visor. With nightvision switched off it’s a barely visible spatter of dull red pixels in the rain, which is sort of cool. I am momentarily impressed by how powerful my virtual nightvision goggles are, trusting that they present an accurate reproduction of the light-sensitivity of the real-world nightvision goggles on which they’re probably based. You could probably see all sorts of real world campfires with the real world version of these bad boys. I only wish there were a button to slip the virtual goggles from my noggin and inspect them with my gloved hands and fingers, turning the device around, adjusting its straps and twiddling its adjustable nubs. Maybe in the beta. 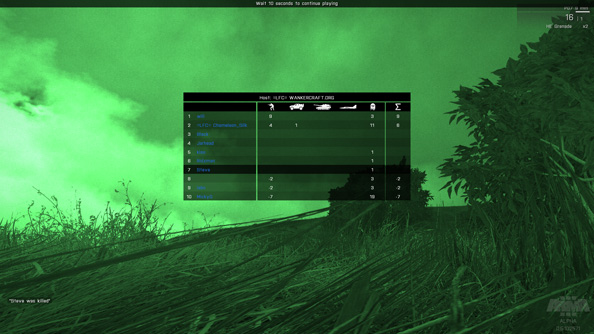 Oh no, I’m shot dead while thinking about how my nightvision goggles work. It wasn’t a complete surprise, as seconds before my death I’d heard two cracks of gunfire coming from the distance. Unlike traditional first person shooters, there’s no obvious indicator as to when you’re being shot at in Arma 3, as stray bullets fired from afar tend not to land too near to you, and when they do hit nearby they tend not to make a whole lot of noise. Not as much noise as the latent crack of the gunshot echoing all around you. Anyway, I’m dead and I respawn much closer to a beach this time. 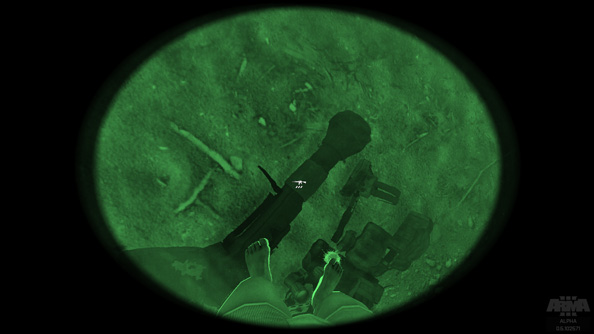 Underwater diving is a new feature in Arma 3, so I slip out of my combat fatigues and prepare to take a dip. Like all experienced beach swimmers, I tuck my belongings into my shoes to keep them safe: my rifle, my handgun, my rocket launcher, a rocket — I hold on to my nightvision goggles however, as it’s really dark in the water and I reckon they’re probably resistant to about 50 metres. 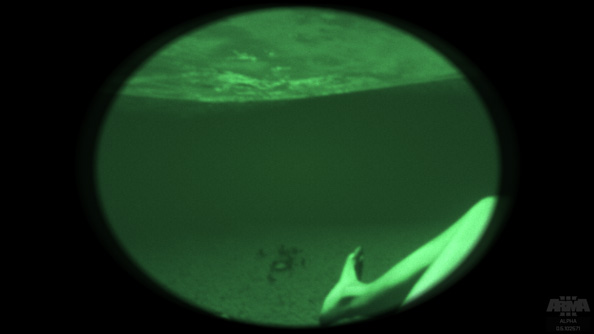 If you swim backwards you get some right sexy shots of your soldier’s moonlit thighs. 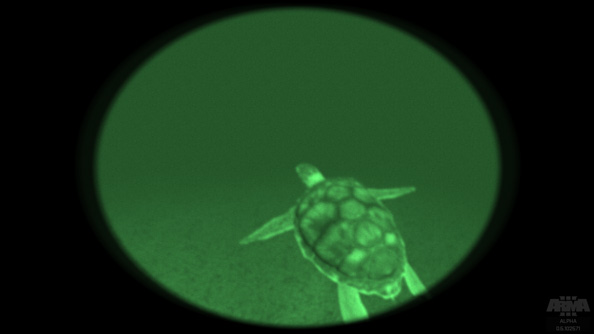 It’s a turtle! What other beautiful treasurescan be found here in the deep and in the dark? If I’d been wearing a proper scuba mask, my vision would be much clearer than this. This is a true fact about the game. There are also some fish, many different kinds in fact. Arma 3’s marine fauna is impressive even at this early alpha stage. I look forward to poking around in the editor to see if an entirely in-engine remake of Ecco the Dolphin might be possible. There’s more to discover underwater too, if only you’d look. 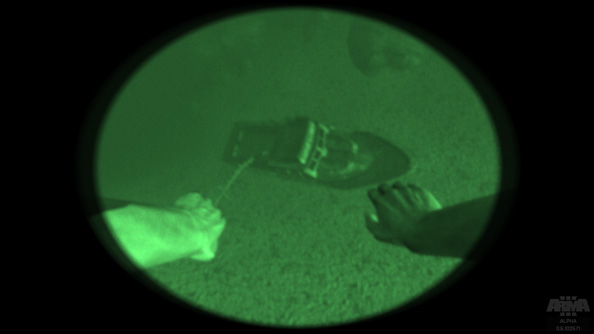 It’s probably wiser to explore this sort of thing with a rebreather equipped, and maybe some flippers too. My soldier starts to make annoying gargling sounds, his heartbeat growing louder and louder in my speakers as his vision blurs. It’s almost as if he doesn’t appreciate the pristine beauty of the ocean floor and all the crap humans have left on it. 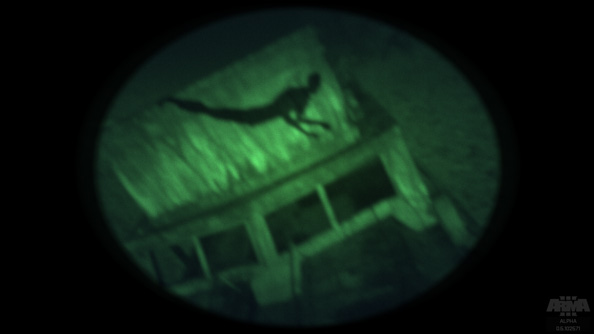 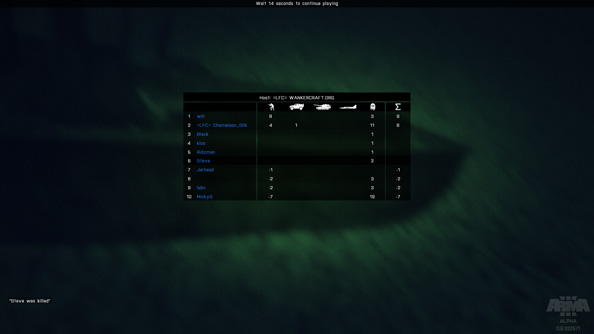 Verdict: if you like turtles and sunken boats you should buy into the Arma 3 alpha. However, even though it’s got more spitshine than Arma 2 had, even at this early stage, there are still huge chunks of features missing and the entire ordeal will ultimately be confusing for the uninitiated. Arma 3 is quirky and underdeveloped enough to put me off recommending it to anybody who hasn’t already made up their minds about it. But it does have lovely realistic bullets. And it runs startlingly well on my increasingly decrepit PC.