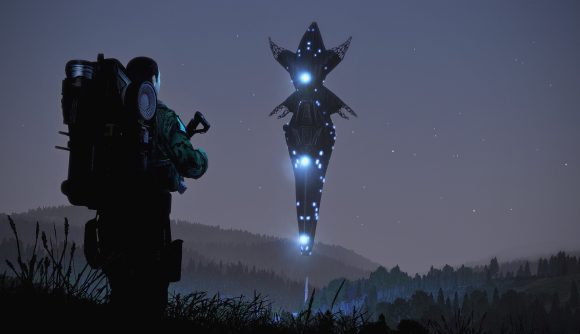 As a group of soldiers makes their way down a nighttime road in the Arma 3: Contact trailer, one says “None of us were expecting this, I know. I get it. But it’s happening.” That more or less sums up the new expansion, which takes the hardcore military simulation of Arma 3 and adds a heaping helping of extra-terrestrial flavour – so you no longer need that Halo mod for a sci-fi fix. It’s due to launch on July 25.

In the new single-player First Contact campaign, your Eastern European training exercise is interrupted by the appearance of a mysterious alien ship. You try to determine the visitors’ intentions, and along the way get into plenty of traditional armed infantry conflict against opposing factions. There’s also plenty of stuff other than shooting, including making use of plenty of advanced tech to study the aliens.

Outside the campaign, there’ll be a new 163 km2 environment set in the fictional Eastern European country of Livonia. You’ll have two new factions in the Livonian Defense force and Russian Spetsnaz, five new weapons, and two new vehicles.

Check out the trailer above for more.

Read more: These are the best PC simulation games