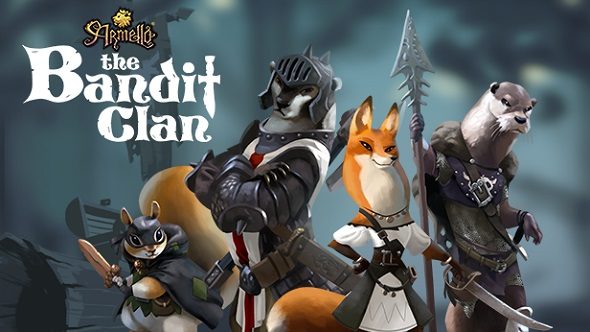 Acting as the first DLC clan for woodland Game of Thrones simulator Armello, players can now download and play as the feared Bandit Clan. Previously only available to Kickstarter backers of Armello, this DLC adds four new heroes, 50 new Bandit quests, a new Bandit Clan ring among other things.

Need something to play with friends? Check out this list of the PC’s best multiplayer games.

Striking a clear difference from the chivalric characters of the base game, the Bandit Clan heroes are more cutthroat, ranging from vengeful mercenaries to master thieves. While vicious, keep in mind these ruthless bandits are all woodland critters. So, instead of a grizzled humancrimelord, Armello’s master thief is a masked squirrel who wields a knife carvedfrom an acorn. While this sounds cute and cuddly, you’ll soon change your tune when you see the otter mercenary slit the throat of some royal guards.

As the heroes are bandits, most of the new quest cards involve suitably criminal activities like tracking down enemy bandit groups or breaking other outlaws out of prison transports. All of these quests are exclusive to the Bandit Clan, so you’ll have to play as one of the four new characters if you want to go one of these adventures.

With most of the quests involving players running into the royal guard, the new Serendibite ring stops players from losing Prestige whenever they fight against the fuzz. Do note that the Bandit Clan characters are notably stronger than most of the base game heroes, so maybe avoid playing random matches online until they have been properly balanced.