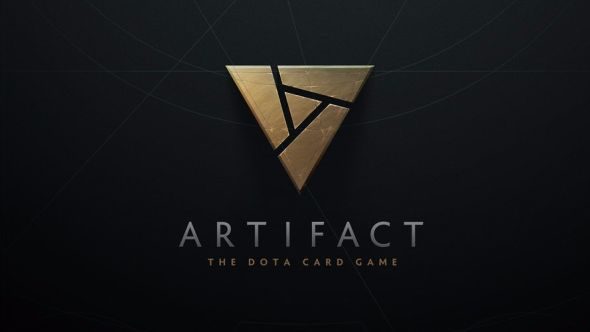 Update: Some more details have been released for Valve’s new card game, Artifact.

Artifact plays across three boards and players take control of five heroes, playing them down lanes complete with creeps that spawn each turn. Heroes, cards, and spells are taken from the Dota universe, their powers and skills repurposed to suit a trading card game.

To tide you over, here’s what’s going on in Hearthstone’s next expansion.

Killing enemy heroes nets you gold and you can use that gold to buy item cards to equip on your heroes. It’s Dota for players who prefer a slower pace.

One special card time is ‘improvement cards’ – you cast these onto a lane and their special effects last the duration of a game. One example given on the Reddit transcript is a player who kept building barracks in one lane to flood it with creeps.

Original Story: Well, it’s happening, and they still can’t count to three. Valve are making and releasing a new videogame in 2018: Artifact, a card game. Based on the universe of Dota 2, that’s about all we know.

It was revealed at The International last night – here’s the crowd reaction for extra laughs:

When you want a new Dota hero, nothing else will do. Wait until Saturday, I think they’ll be a bit happier.

Beyond that brief glimpse no other information on Artifact has been released. Here’s the trailer in Russian, if that’s your bag, and the official Twitter account has started up – I followed within the first 6,000, no biggie. It’s not even completely clear that it’s definitely just going to be a videogame, rather than have a real-world component, but let’s assume so here.

Given Valve’s love of open trade, fan-made content, and free-to-play games, the chances of Artifact having all three of those seem high. The Steam marketplace is already used for the buying and selling of trading cards so some actually having an effect in-game somewhere doesn’t change that. I doubt my 10 Second Ninja Red Light card is going to suddenly be playable, however.

For what it’s worth, rare and powerful cards in Magic: The Gathering go for upwards of $80, not counting older and out-of-print cards (which get into the high thousands). Depending on whatever convoluted system getting packs and cards entails in Artifact, and this is Valve so you can bet on convolution, it could be an expensive one if individual trading is allowed.

Don’t expect to hear more before the year is out but obviously PCGamesN will let you know if we do. If Gwent wasn’t doing it for you as a Hearthstone competitor before, I think it’s got one now. I’ll leave you with how one dedicated fan account reacted to the news: