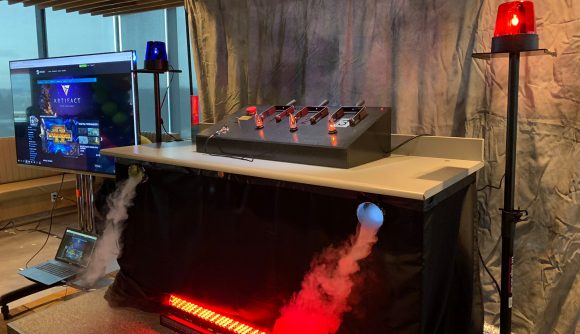 Valve’s offices are perhaps the most mysterious place in the videogame industry, a magical place where fairies sprinkle magic dust to begin Steam sales and a team of scientists monitor an extra-dimensional void from which Half-Life 3 will finally emerge, fully-formed. Er, actually, it’s an office building where normal humans develop videogames, but the team still likes to keep a bit of whimsy around.

The Artifact launch came not with a simple click of a button on the Steam back-end, but with fog, lights, sirens, and a rocket-style launch panel complete with a big, red button. That button’s real, too, wired to work as the enter key on a nearby PC.

Perhaps the strangest bit of all this is the fact that there are three switches on the panel, naturally labeled ‘1,’ ‘2,’ and ‘3.’ Proof that the folks at Valve can count to three? Maybe not, but some combination of Portal, Half-Life, and Left 4 Dead sequels could launch via this contraption.

In the Valley of Gods is the one other Valve title we know to be in development, but it’ll be a while before it gets the special launch honors. It’ll be out “when it’s ready,” artist Jane Ng says. “Aka not anytime soon!”

Ng provided an image of the launch panel, as did fellow developer Fletcher Dunn. It’s only the second best detail we’ve seen out of the Valve office this year, next to a giant image of the Lord Gaben meme.

Check out our Artifact review for more details on the game, or if you’re looking for more guided help here’s how to play Artifact, and some of the best beginner Artifact decks. So far the Dota card game seems to be a hit, but we’ll see how its fortunes play in in the weeks and months ahead as the community puts it through its paces.