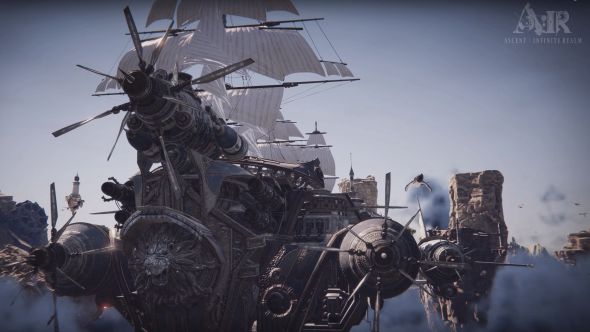 Bluehole subsidiary PUBG Corp are the team behind this year’s smash-hit PlayerUnknown’s Battlegrounds. But Bluehole proper have announced their next game: Ascent: Infinite Realm is an MMORPG that mixes steampunk with high fantasy.

Related: here is everything we know about Ascent: Infinite Realm.

In the trailer, which you can check out above, intricate airships feature alongside fire-breathing dragons, and impressive mechs storm epic fortresses. Bluehole promise the game will be deeply customisable, with unique options for airships, five character classes, and the ability for players to create their own quests.

A:IR’s PvP mode is governed through battles between realms. A press release form Bluehole says that “in RvR, factions fight for fame and glory, taking turns to lead offensive and defensive efforts using all kinds of fantastical flying vehicles. Players can also join the fight from the ground with mechs and the use of anti-air artillery.”

If you don’t want to fight though, A:IR still seems to have a lot to offer. The trailer shows off a detailed base-building system, and several other activities, ranging from fishing to what seems to be a race down a hill featuring several players in shape-shifting barrels.

Ascent: Infinite Realm will be published by Kako Games, with a closed beta due to the first half of 2018.