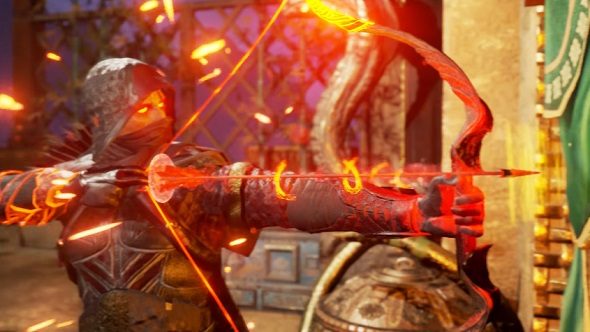 As its Kickstarter trundles on, developer Intrepid Studios have released a special cinematic trailer for their ambitious MMO, Ashes of Creation. Centred around the Predator class, it shows a player sneaking into a palace, stealing some treasure and then escaping under the cover of a siege.

See what Ashes of Creation is up against with this list of top PC MMOs.

While it is a cinematic trailer, the video shows how a quest in Ashes of Creation may play out. Upon spotting a wagon laden with treasure, the Predator hotfoots it into the city to steal some of the jewels himself. Infiltrating the city involves the thief performing some Assassin’s Creed-esque parkour, clambering up one of the walls and breaking in from there. Based on the combination of stealth and ranged skills, one can imagine that the Predator class comes from the player picking a Ranger as their main class and then a Rogue as their subclass.

After breaching the city wall and taking out some guards with his magical extendo-bow, the Predator uses his stealth skills to ghost past soldiers patrolling the palace and sneak in one of the back windows. Calling the class the Predator seems no accident, with the hooded figure using the movie monster’s active camo to get past the guards on duty.

With the jewel in sight, the Predator uses a special fire arrow to kill two guards with a single shot. I imagine in PVP situations, this class will be devastating if it manages to sneak up on an unsuspecting mage or cleric. Once he’s pocketed the jewel, the burglar fires off a special firework arrow to signal to his buddies outside that the siege can begin.

As it is a cinematic trailer, it’s hard to tell if this specific encounter is part of a scripted quest line, or whether it has emerged solely through player action. Ashes of Creation is selling itself on the changeability of its world through the Node system, so it may not be out of the realms of possibility for an event like this to occur. The combat and character animations need a fair bit of work, but it’s what you should expect from pre-alpha footage of a crowd-funded MMO.

If you have been impressed by this trailer, the Ashes of Creation Kickstarter is live until June 2. While it has already exceeded its funding target, Intrepid Studios have plenty of stretch goals for backers to work toward. At time of writing, the project is sitting at just under $1.9 million with the next stretch goal being the addition of social organisations like trading companies and thieves guilds.