“Is it heavy?” asks Donald Gennaro to juvenile dino snack Timmy in one of Jurassic Park’s less quotable scenes. “Then it’s expensive – put it back.” This will also be your first thought when holding Asus’s enormous Republic of Gamers branded Matrix GTX 980 ti Platinum edition. Its weight and dimensions convey a level of power that verges on intimidating. Do you really need such a behemoth in your PC case? Do you deserve one? I’ll refrain from venturing an answer to the latter and instead focus on the performance, cooling, and overclocking potential of this impressive GPU.

First things first: let’s establish exactly where NVIDIA’s GeForce GTX 980 ti sits in the graphics giant’s current pecking order. At the very top sits the Titan X, a 12GB Maxwell card with an imposing £850+ price tag on UK shores. It isn’t really intended as a consumer solution for a gaming machine, but rather a bit of muscle-flexing on NVIDIA’s part. It’s a card that demonstrates the absolute apex of the company’s gaming graphics architecture tech, a weapon in their perpetual arms race with AMD. The important thing from a gamer’s perspective is that tech from the Titan X drips down into other, more affordable cards. 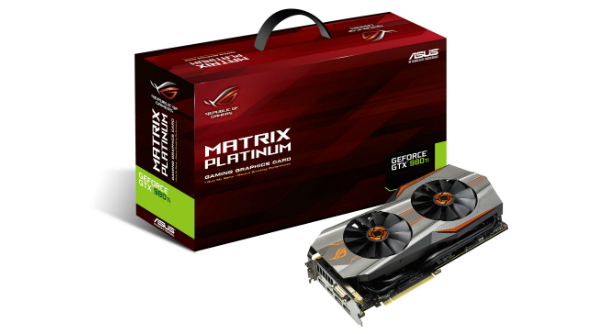 That’s where the 980 ti comes in. Architecturally it has more in common with the Titan X than its cheaper namesake, the GTX 980, built with 6GB GDDR5 memory,2816 CUDA cores (compared to the GTX 980’s2048) and 22 streaming multiprocessors. Line the three top-end NVIDIA cards up next to each other, and you’ll see the 980 ti’s specs come much closer to the Titan X than the 980.

What Asus’s own take on the reference card does is narrow that gap further still. The PCB has the same number of CUDA cores, SM units and the like as NVIDIA’s reference GTX 980 ti, but Asus have really gone to town adding extras that raise the ceiling for stable overlocked core and memory values. So while it certainly occupies the nosebleed end of the graphics card at around £650, the ROG Matrix GTX 980 ti Platinum Edition does justify its pricing when you factor in how close it comes to Titan X performance levels.

At the heart of the ROG Matrix (let’s just call it that from this point, shall we?) is Asus’s own DirectCU II cooler design, which the company claims is 30% cooler and three times quieter than NVIDIA’s reference model. With DirectCU II, four 10mm copper heat pipes touch the GPU directly rather than via a copper base plate, transferring the heat towards a ‘wing blade’ fan design that generates 105% more air pressure than stock fans, generating a more powerful air flow. 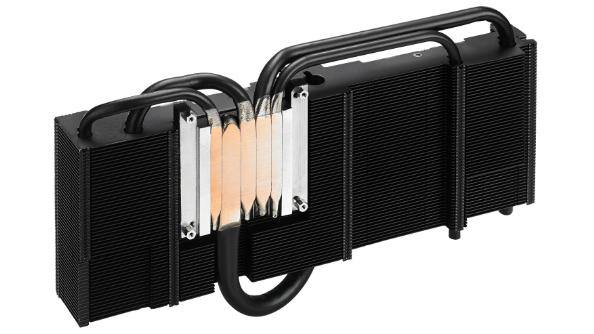 What it means in real life: the ROG Matrix does indeed run cold and quiet, rarely topping 60 degrees celcius even at our highest stable overclocked settings under load, and idling at under 30 degrees. For a card with such a volume of heat-generating capacitors on its PCB, that’s very impressive. The fan isn’t working particularly hard to achieve that, either – when left to MSI Afterburner’s auto setting, fan speed didn’t go far beyond 50% under load, and is barely audible from within a PC case even then.

However, in our test machine the card does suffer some coil whine under load. It’s hard to tell whether to place the blame on the Corsair AX1200 PSU – which is known to produce whine – or the card itself. The power supply doesn’t emit coil whine with older, less powerful GPUs installed, so it may be a power draw issue. Some users have reported similar issues with this card, but I’m hesitant to attribute the issue directly to the GPU rather than power supply. Depending on your exact hardware configuration, it’s something that may crop up.

Honestly though, I can deal with donning a headset to eliminate a little coil whine when the gaming performances are this good. The DirectCU II cooler has allowed Asus to boost the base and boost core clock values from the reference card’s default 1000/1075MHz to a mighty impressive 1291/1317MHz. The memory too has been tweaked from 7000MHz (reference) to 7200MHz. Anyone who’s overclocked graphics cards will appreciate that the out-of-the-box overclocked values here are massive, particularly the core clock. 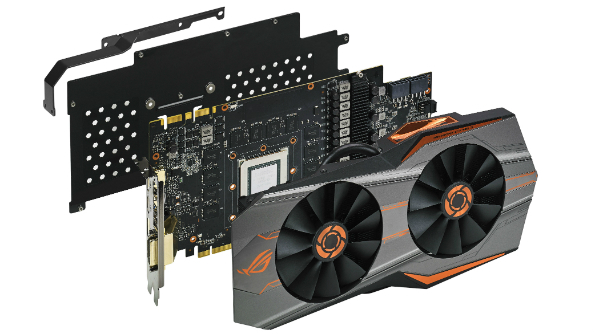 Those boosted clock values translate to a significant gaming performance increase. I’m talking significant. Before we get to our own benchmarks, it’s worth noting that in Asus’s own testing the ROG Matrix performed 21.6% faster than NVIDIA’s GTX 980 ti reference model running The Witcher 3 at high settings and 1080p, with an average frame rate of 82.7 compared to the reference’s (nontheless impressive) 68. It’s 18.4% faster running GTA V at 1080p and 2xMSAA, too. But let’s not take Asus’s word for it: onto our benchmarking. 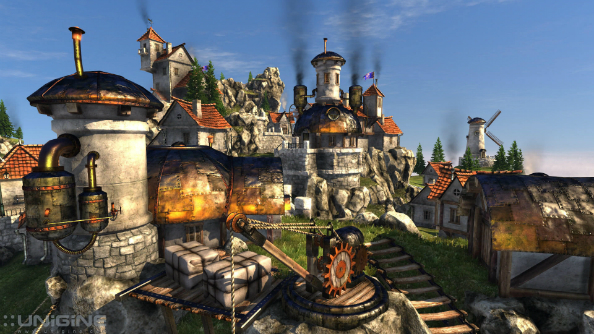 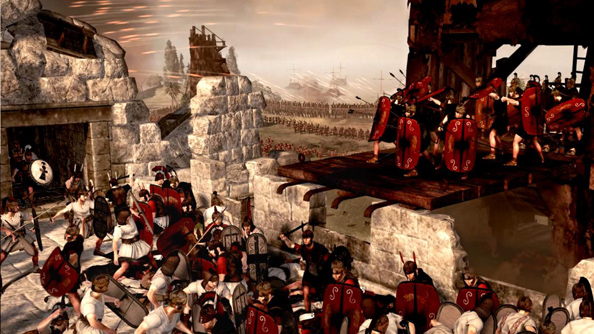 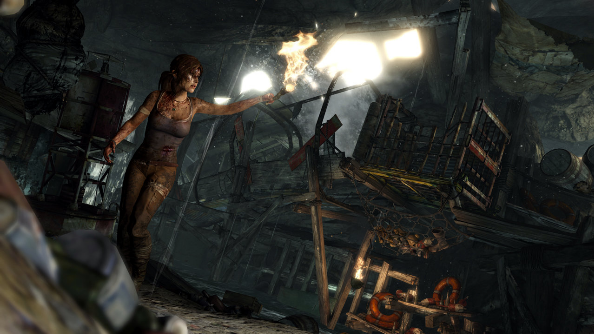 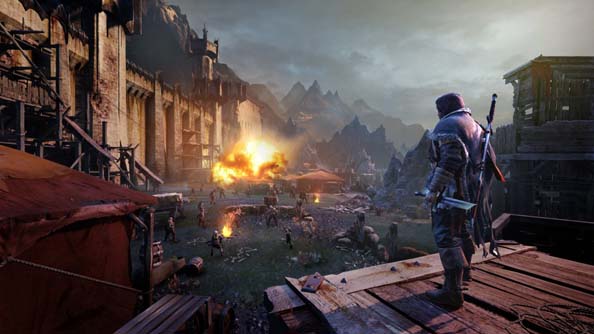 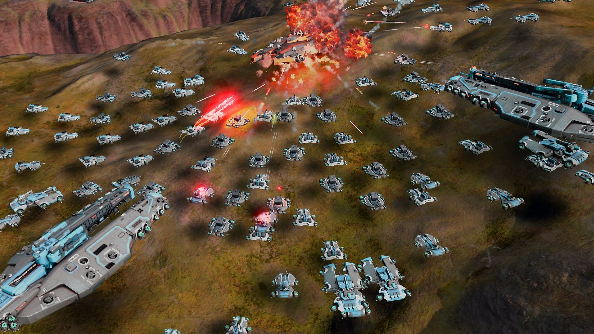 What the above results demonstrate is that the ROG Matrix is a future-proof – bullet-proof, even – solution to 1440p gaming. And, if you’re prepared to game at 30 rather than 60, even 4K gaming. What’s more, the performance you’re paying for over the 980 ti reference design is right there from the off; you don’t have to go hunting for it by overclocking or over-volting.

What I found disconcerting initially, though, was that despite the card’s many overclocking-focused features (more on that in a second), I wasn’t able to push the core clock or memory values much beyond what Asus has already managed. At first I loaded Asus’s GPU Tweak software and experimented with both the one-click and manual overclocking options, but found certain settings reset and the card was downclocked upon Windows startup – an issue others have also encountered.

However, by default I use MSI Afterburner to change values and Heaven 4.0 for stress-testing, so I reverted to my old faithful. Sure enough, I was able to boost the power limit and core voltage significantly. In fact, the card has a ‘safe mode’ button tucked away on its PCB so you can reset all default values and voltages if you push it too hard, and that lends a lot of confidence when pushing the mV envelope.

MSI Afterburner boosted the core clock by 50MHz and the memory by 100MHz before artefacting and system hangs began to creep in. That might not seem like a huge boost, but it’s crucial to remember that the card’s been pushed way, way beyond reference card values already by Asus. Achieving a stable 1367 boosted core clock, and keeping the temp under 65 degrees while you’re at it, is nothing short of miraculous.

The ROG Matrix’s LED indicator lets you keep an eye on how hard it’s having to work at a given time, and when you’ve successfully activated safe mode. It’s a tasteful use of the Maxwell coloured LED functionality, and personally I much prefer this to any gaudy lighting implemented purely for aesthetic purposes. It’s also equipped with a memory defroster for sub-zero overclocking. I’ll be completely honest here: I did not test this one out, because the very idea terrifies me, thankyouverymuch. A welcome addition, nontheless.

Okay, so we’re not talking about a thrifty purchase here. No amount of overclocking capability or sky high frame rates are going to diminish that mighty £650 price tag. But as we as gamer are coming to demand higher standards of frame rate stability and buying into higher native resolutions, it’s becoming increasingly de rigueur to drop similar figures on a pair of GTX 970s, for example, which would set you back a similar figure.

What Asus offers with its fearsome take on NVIDIA’s reference card is a GPU that narrows the gap between GTX 980 ti and Titan X SKUs, bolstered by welcome extras and a level of construction quality that’s evident when you hold it in your hands. If you’re shopping around at this price range, the gains on NVIDIA’s reference card clock values really do justify the ROG Matrix’s positioning.