It’s universally acknowledged that there’s little more fun in this world than a long ferry voyage. Ubisoft are tapping into the joy that can be found in hours of wave-rolling travel over a great expanse of samey blue by making the map in their Caribbean-set Assassin’s Creed large enough to take “half an hour” to travel across.

“We don’t talk about it in terms of size, that would be a little bit unfair – there is a lot of ocean in the Caribbean,” game director Ashraf Ismail told Eurogamer. “But it is the biggest game we’ve ever made. […] It will take – [to sail] across the whole game world – maybe half an hour.”

And the campaign itself, “The story and narrative itself will last 15-20 hours, but we’re hoping that people got lost in the Caribbean world, in the toybox we’ve created.”

Open ocean will be a large part of the vast map but these sections will be populated by directions to side-quests and sharks. Lots of sharks. 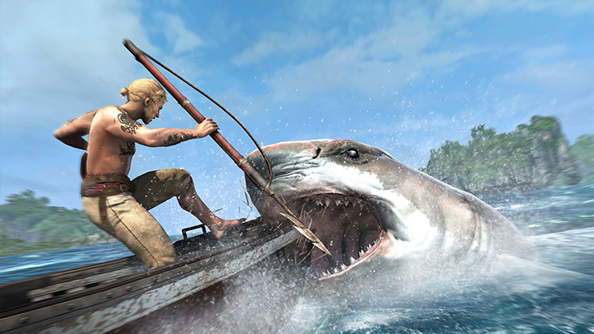 If Assassin’s Creed 4 can have this huge map and keep the action at a steady pace then a large ocean is a good thing. Long sea travels or hopping about the map on fast travel can really kill a game.