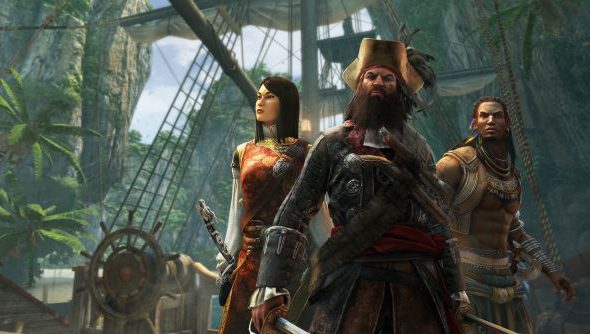 One of the aims of the top design team at Ubisoft Montreal responsible for Black Flag was to explore the man behind the beard: Ed Thatch, the “really smart guy” who called himself Blackbeard and never once said ‘arrr’, except possibly in pain. In single player, he’s part of Edward Kenway’s extended entourage – an occasional mentor in piracy found lazing about the shore of Nassau.

In multiplayer, that’s all forgotten. Want to ‘arrr’? That’s your prerogative. Buckles to swash? Please, be our guests. Tonight, you’re Blackbeard.

Blackbeards wrath mp dlc is now live on PC… yes that’s ahead of the playstation release. We do love you too you mouse warriors x

The Blackbeard’s Wrath pack is available on PC for $2.99, and sees Thatch joined by The Orchid and The Jaguar.

The Orchid will employ training gained as a military advisor during China’s Qing Dynasty to put you at the wrong end of her sword. The Jaguar is an Aztec Templar who’ll use a ‘discreet axe’ – something I’d think impossible if I hadn’t been Connor in Assassin’s Creed 3.

Blackbeard? He’s all about knocking opponents off balance, before sticking something sharp in their gut.

Truth told, I haven’t found time between the sailing, scourging, sneaking, and (while nobody’s looking) occasional swashbuckling to try out Black Flag’s multiplayer. But I’ve heard nice things. Are they accurate?