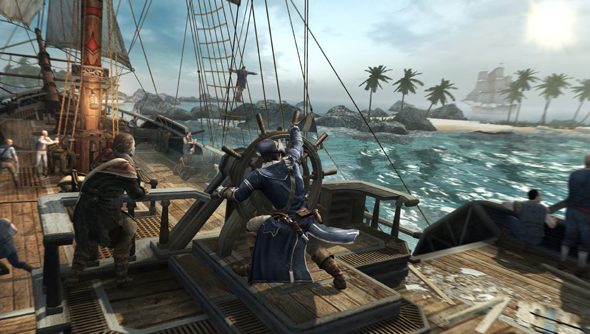 Assassin’s Creed has always strived for authenticity. The memory-accessing Animus, for instance, can instantly translate into English any language it streams into your virtual ears, be it Arabic or Italian. In past games the Animus was a bit of a prude, neglecting to translate the ruder terms some native speakers would shout at Ezio and Altair as they scambled across roof tiles. Assassin’s Creed 3 is set in America though, during the revolution, where everybody speaks good old fashioned American. So perhaps I shouldn’t have been surprised when I was accosted by a particular word that I didn’t even know had been invented in the 18th century. Confused, I turned to Assassin’s Creed 3’s lead designer Steven Masters, to ask him about assassins, America, naval warfare and swear words.

PCGamesN: Did that man just call me a bellend?
Steven Masters, Lead Game Designer: Quite possibly! Our writers have a lot of fun. They’ll find terminology and slang and insults from the era, so obviously bellend is a bit contemporary, but yeah it’s very likely somebody just called you that.
PCGN: So did you trace the etymology of bellend?
SM: Yeah, people do that. We have guys for that.
PCGN: How much research do you do into the language and accents of the time? I’ve heard that the British accent was very different in the 18th century – was there a conscious decision to update it, to make it recognisably British?
SM: We actually studied the census data on the makeup of the civilian population in Boston at the time. So we knew there were a certain amount of English, Scottish, Welsh, Irish, Dutch people, and we actually tried to mix all of that into the audio. The question of what the English accent sounded like at that time – it’s really hard to say. We have the same thing in Quebec with the French accent, they say that Quebec French is closer to original French than modern French. But the reality is that both branched at the same time, right? So it’s difficult to say which accent is a more accurate represenation. We’ve no way of backing up the assertion.
PCGN: Do you think the War of Independence setting is contentious? Are you guys concerned that the game’s theme might come across as a bit “America, fuck yeah”?
SM: Absolutely. When you play the story, you’ll find it’s not an “America, fuck yeah” story. It’s really a fight between Assassins and Templars. The Revolution is almost a backdrop to what’s happening. Connor is kind of an outsider from all cultures here, he’s half Mohawk, half British, so he doesn’t really fit within his own society, he brings this outsider’s perpective to all of these different conflicts. We’re not bombastically saying, you know, “go America go!”. The Revolution is a coincidence of the story, the real fight is to remove the oppression of the Templars.
PCGN: You’re going to have a lot of players learning more about the American Revolution from this game than from a history book, do you feel there’s a special responsibility to accuracy there? And how do fit your own story into that history?
SM: Well the more contemporary we get with Assassin’s Creed, the more we know about what was happening at that time and the more source material we have. We have the diaries and letters these guys were sending to each other. All of the founding fathers, the troop movements, where people died and how people died, they’re all really well documented.
But we always find the cracks, where say for instance, this guy died on the battlefield but nobody’s really sure how he died: was it a pistol shot or was he stabbed? That level of detail can get muddied in the history books, so we use those openings and we wedge our story into those. But yeah, we try to be as accurate as possible. We have a historian, we have Mohawk consultants to make sure weget that culture correct, and the influence of these people ends up forcing us to rewrite parts of our story.
Here’s an example. We wanted to have a scene with Connor and an elder from his village, and the initial approach was kind of the misogynist view that it would be an elder man. But no, our Mohawk consultant told us that they’re a matriarchal society. So we’re like “oh shit, gotta rethink this one”.
PCGN: I guess Native Americans are often patronised in popular media.
SM: Absolutely, that’s why we’re working with consultants to make sure we get the culture correct and that we’re treating it with respect. Basically just not messing around with it. We really don’t want to bring a patronising or offensive view. We take a lot of pains to make sure it’s correct. PCGN: So Assassin’s Creed 3 is a triple A title, Ubisoft’s biggest title, it needs to go on-time and on-budget. How do you take the risk in adding a side-feature as big and as different as naval battles?
SM: The naval stuff was a huge risk, it was a gamble. It really easily could’ve not worked, but it was so pivotal to the history that we couldn’t ignore it. So we took the approach of saying, we’re not going to move all in straight away, let’s put a couple of guys in the corner of the office and have them prototype for a while. Let’s see them put together some concepts, to see if it’s interesting and if it will fit well with out gameplay. With prototyping you can do things very cheaply and quickly, to prove out the concept, and pretty quickly we realised that the early version of naval battles we had was super interesting. It was unique and it serves the game elegantly.
Our pillars are combat, navigation and stealth. Those are our three core gameplay concepts, and any of our features needs to support at least one of those… well, that’s not strictly true, we’ve got mini-games like the board games and stuff. And you can pet dogs, and that doesn’t have anything to do with anything…
PCGN: Oh, that was going to be one of my questions…
SM: Hah! But yeah, for the core gameplay, those are our pillars. The ship combat ends up fulfilling two of those, navigation and combat, it dovetails pretty nicely. It’s not something completely outside of what you’d expect when you buy an action adventure game. So yes it was a risk. It was a huge investment for us too — we had to staff an entire team for it, the guys down in Singapore have been working like crazy to make this — but ultimately you don’t get the big payoffs without taking some risks.
PCGN: Were you as thorough with your ship research as you were with other parts of the game?
SM: It’s an area where we differ from the reality. In many of these historical ship battles the ships taking part were called ships of the line. They would literally line up. In the Battle of Chesapeake Bay, I think the French had 26 ships and the British had 23, and they wouldmanoeuvrefor hours to form a line until they had the right combination of tide and wind, so that their gun ports are tilted upwards, so that they could shoot farther, and so that they could open up the gun ports at the bottom and not flood the ship.
It took hours to sidle up alongside the enemy fleet, and then they’d just pound the crap out of them. There’s probably a game there, but it’s not the one we wanted to create. We wanted it to be more dynamic and action-oriented. We didn’t want it to take an hour to set the sails, right? So we take some liberties there, to better support a fun experience. But at the same time we get the flavour of the naval experience.
PCGN: Do you progress through ranks as a ship captain?
SM: You don’t rank up in captaincy, but you can upgrade your boat in various ways. You can buy more cannons, hull plating, a ram bow so when you hit ships you do more damage, improved rudders, new ammunition types, enhanced ammunitions. So there’s a variety of ways to improve your ship. PCGN: So AC1 had flags, AC2 had feathers, but this time you seem to have really disguised your collectibles as something a bit more interesting…
SM: Hah, yeah, the ‘trinkets’ are my favourite collectibles. The idea is that there is this guy who has these letters from the the lieutenants of Captain Kidd, and the letters each reveal the location of a fragment of a map that will lead eventually to Captain Kidd’s treasure. So you have this kind of awesome loop where you’re exploring the landscape, you find a trinket, you bring it to this guy, he sends you off on these amazing missions — which are very exotic, with directed, linear gameplay — to find each map fragment. You complete four of those before you open up the final one, where you find Captain Kidd’s long lost treasure. It’s a really satisfying loop and it has a lot fun gameplay built into it.
PCGN: Are you guys further refining the controls on PC?
SM: Yeah, it’s getting the same treatment that we did for the console version. So the free running is improved, the combat system is improved, and the rest of it pretty much maps to the console controls. Obviously there’s higher resolution, faster framerates…
PCGN: Would you say that Assassin’s Creed defies mouse and keyboard controls?
SM: You know, when we first did them on AC1, my friend and colleague Pat Plourde put together this scheme. I think it was Mouse 2 to run, and I was just like “what the fuck are you doing?”. But after playing with it for a while I sort of got into the groove, it just sort of worked. But it’s kind of a challenge to map them across, and there’s no easy solution to it. We do start with the controller gamepad, but to me PC is very important, I’m a PC player and I want to enjoy the game at the best it can be. The transition to mouse and keyboard is difficult, but once you wrap your head around it, it becomes okay.
PCGN: Thanks for your time, Steven.