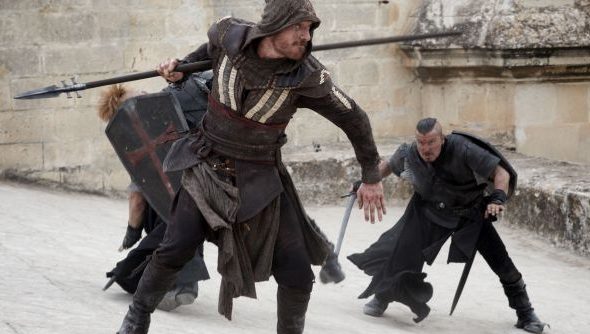 They’re making an Assassin’s Creed movie, a sentence I’m still not totally okay with typing out. It’s got Abstergo and the animus and a lot of stabbing, all of which we can actually see in action in the first proper trailer, released via Jimmy Kimmel last night. In lieu of an actual time-walking Ass Creed game this year, it’ll have to do, and you can pass judgement below.

There won’t be an Ass Creed game on our best PC games 2016 list, but it’s packed full of greats anyway.

Have a gander at some Michael Fassbender fast leaps:

Reactions were varied in the PCGN cyber-office, where Joel came down hard on the clichés, I wasn’t a big fan of Kanye’s contributions but liked the action, and Phil and Kirk were alright with it. We then fell into a big debate about whether Silent Hill is a watchable film or not, and nearly everyone got fired.

If you’re excited, or you just go see any videogame movie that comes out in the hope that one of them, finally, might be worth the time and money (let’s go Warcraft), here’s the release dates for various regions:

Expect many more trailers, clips, featurettes, interviews and the rest of the Hollywood hype machine and spoiler-fest between now and then. As much as watching videogame movies fall further and further into disrepute is a laugh, hopefully between this and Blizzard’s effort the streak is broken this year – even if they aren’t artistic masterpieces of writing or storytelling, they should at least be exciting.