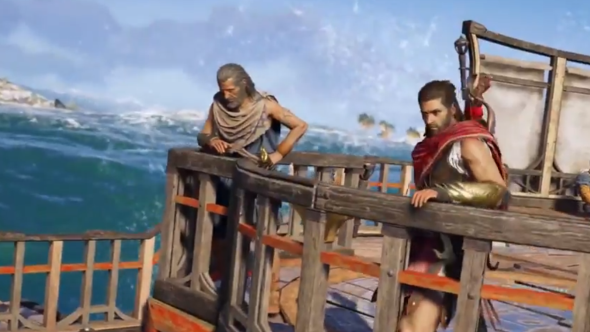 Most characters in Assassin’s Creed Odyssey can either be press ganged or persuaded into joining your ship’s crew. For your enemies, that means knocking them out and smuggling them back to your watery base, just as Metal Gear’s Snake would’ve done.

Back in 2015, Metal Gear Solid V turned the word ‘Fulton’ into a verb. The Fulton recovery system allowed you to tie unconscious enemy soldiers to a balloon, airlifting them back to Mother Base where they would join the team.

Now Assassin’s Creed Odyssey will let you do the same. There’s no balloon, but you’ll be able to Fulton baddies back to your ship to join the crew.

Will Assassin’s Creed Odyssey be one of the best sandbox games on PC, on land and sea?

The ability appears in the game’s skill tree, says Kotaku in its E3 write-up on the game. There’ll also be a way to recruit many of the civilians in Assassin’s Creed Odyssey for a life at sea, too. Maybe get them singing some of those Ancient Greek sea shanties.

Recruitable followers come with stat bonuses and perks, which you can spot from a distance as your bird flies about the map.

Assassin’s Creed Odyssey has been developed by Ubisoft Quebec, not Origins’ Ubisoft Montreal, which means it’s nearly finished already: it’ll be out on October 5th this year.