How do you find and beat the Cyclops in Assassin’s Creed Odyssey? This mythical beast is one of four creatures in the game, and must be defeated in order to access the finale of one of Odyssey’s major questlines.

After discovering Atlantis, you will unlock a new quest line: The Gates of Atlantis. To operate the gate, you will need to gather four different artifacts. Each artifact is in the possession of a mythical beast. In this instance, we’ll be retrieving the artifact from Kythera, which is held by the Cyclops.

To begin your hunt for the one-eyed beast, head to Kythera Island and locate the A God Among Men sidequest, which can be found at the Pilgrimage Site on the island’s northwestern coastline. Here you’ll find a gaggle of NPCs arguing about a “god” who has been taken captive in a nearby fort. Accept the quest, and head just down the road to infiltrate the fort and rescue Empedokles.

Empedokles will then offer you the Left to Dye sidequest, which tasks you with finding his purple cloak. Inside such a cloak is a special key, which will unlock a door on The Isle of Thisvi, located off the coast of Phokis. Complete the quest to get the key, and then head to the island to complete the newly unlocked Stairway to Olympos quest. 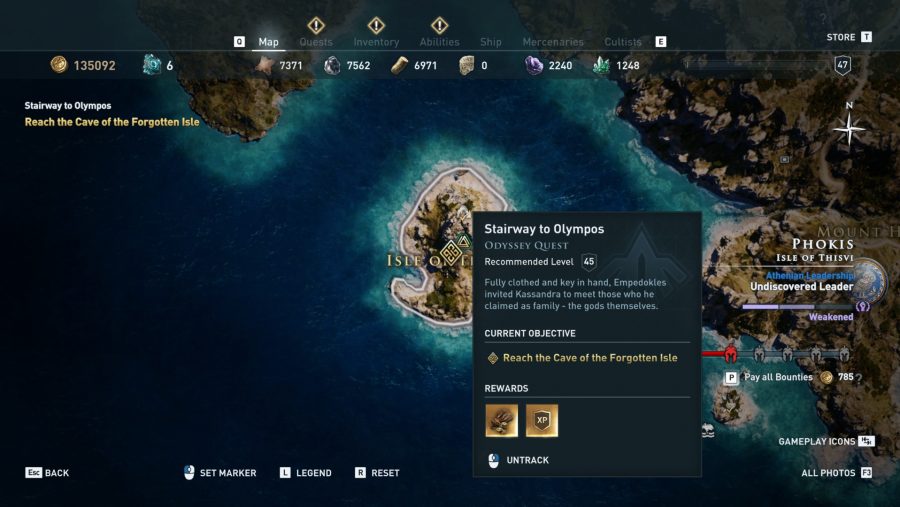 Slot the key into the shrine and the gate will open, revealing Brontes The Thunderer, AKA the Cyclops. Defeating the Cyclops is a bit of a challenge, but by now you’ll be very comfortable with Odyssey’s combat system, so you should be fine. Unsurprisingly, the Cyclops’s weak point is his glowing single eye, so whip out your bow and hit some precision shots with the deadliest arrows you have. He will cover his face with his arm, but it’s pretty easy to get a shot in anyway. Deal enough damage and he’ll collapse in a heap for a few seconds, allowing you to wail on him with some melee abilities.

At the halfway point of the battle the Cyclops will wrench a piece of rock from the wall and use it as club, extending his attack reach. Be wary of his new sweeping attack, which can knock you to the ground, allowing for him to fit in several (potentially lethal) followup blows. He’ll also be able to slam the club into the ground and cause damaging stones to fall from the ceiling, so be sure to roll out of the way of these and stay mobile. This makes firing arrows a little trickier, but try to take shots at every opportunity. As before, after a while he’ll become exhausted and stop attacking, which is the perfect time to fit in some melee blows.

After defeating the Cyclops and looting its body you’ll be rewarded with the Polyphemos Cyclops Bludgeon weapon, and the Prize of the Cyclops. Return to Atlantis with this artifact to unlock one of the four gate seals, get a snippet of First Civilization lore, and complete one stage of The Gates of Atlantis quest.