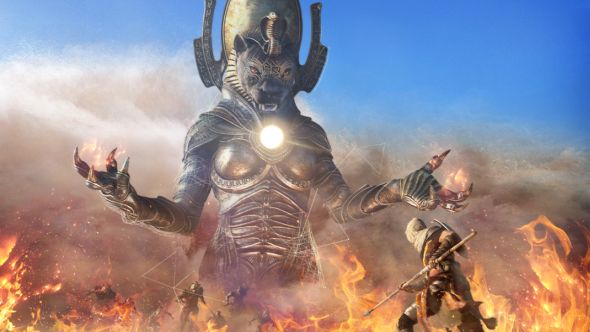 The next month of Assassin’s Creed updates have been announced. December updates will be rolled out throughout the month, featuring new quests, items, and the final Trial of the Gods.

Ubisoft don’t get enough credit for how much they’ve changed multiplayer games.

The game’s new title update will be released this month, featuring a Nightmare difficulty mode, and enemy scaling to adjust lower-level enemies later in the game. There’ll also be two new quests – one of those is being kept as a surprise, but if you’re level 32 or higher, you should be able to manage the game’s new Horde Mode, allowing you to prove your worth in the Cyrene arena against never-ending waves of enemies.

There’ll also be two new item packs released throughout December. The Gladiator Items pack, which arrives December 12, lets you equip new armor, as well as Neptune’s Trident and Hercules’ spear. The wacky Items pack, out on December 26, hasn’t been fully revealed yet, but Ubisoft say it’ll be “a perfect fit for the bath towel outfit.”

Finally, the third and final Trial of the Gods will be available this month. As well as renewing access to the Anubis and Sobek trials for new players, the third trial will see players take on the warrior goddess Sekhmet.

The December updates will roll out throughout the month.