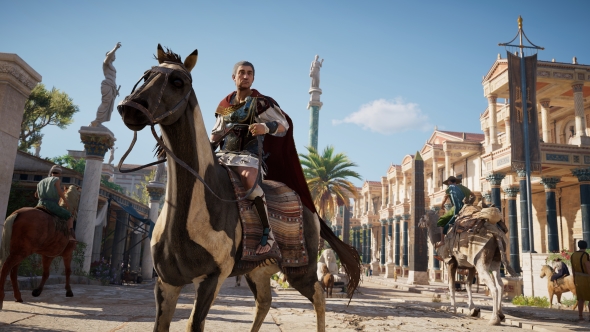 Can videogames teach history? It is a question we have asked ourselves before, although our musings have never delved into the scientific. Ubisoft, however, have spent a bit more time and effort on the idea. The developers of the historical stab-a-thon Assassin’s Creed series put together an experiment during the creation of Assassin’s Creed Origins to see if their recreation of Ancient Egypt could be used as an educational tool in schools. The results are surprising.

Visit another period of history with the best WW2 games.

40 students with no prior knowledge of Ptolemaic-era Egypt were split into two groups of 20 and taught about the period via two different methods: group A were lectured by a teacher, while group B were given access to Discovery Tour. This is the new Assassin’s Creed mode that allows you to freely explore virtual Egypt and interact with living-museum-style tours and exhibits.

After these sessions the students took the a test. 53% of group A passed while group B passed with 41%. Traditional teaching trumped videogames, but the test very clearly demonstrates that videogames can educate. The results encouraged Ubisoft Montreal, and proved that their decision to pitch Discovery Tour as part of their overall vision for Assassin’s Creed Origins had not been a doomed endeavour.

“The idea came from the fact that we were putting so much effort into recreating these worlds,” Jean Guesdon, creative director of Assassin’s Creed Origins, explains. “We see that a lot of people might be interested in these worlds and want to know more about them, but they cannot access it.” Guesdon uses his parents and young children as examples of audiences that may find videogames difficult or age-inappropriate, but who have desire to know more about an ancient world.

Over the years, Ubisoft have been contacted by teachers and lecturers praising the their attention to detail and achievements in recreating worlds of the past. “We keep hearing testimonies from teachers that say ‘What you are doing is incredible, I am trying to use that in the classroom, but it is difficult’,” Guesdon says.

The problem for these educators is that showcasing the culture of places like Renaissance Italy or Revolutionary Paris with an Assassin’s Creed game is made tricky when guards are giving chasing across rooftops. Discovery Tour finally fixes that. It presents the world of Ancient Egypt created for Assassin’s Creed Origins but strips it of all quests and dangers, while bolstering it with fully-narrated tours that explain 75 different facets of Egyptian culture, engineering, politics, and life.

It is easy to imagine that a huge, standalone tourist mode would require months of in-depth research beyond what Ubisoft would typically carry out for an Assassin’s Creed game, but that was not the case. “The world building already encompasses a lot of these details,” Guesdon says. “The idea with the Discovery Tour is to take the spotlight and focus on details that you might not notice while playing the game. You revisit this world, but in a more calm way. We get to say ‘Hey look, you may not have noticed this, but it is here for this reason and it comes from this research that we did’.”

This becomes clear the moment you begin one of Discovery Tour’s trails. As a gold line draws a path through a world you have become familiar with over 60 hours of play, pop-ups and narration point out that those NPCs you always assumed were just background dressing are actually performing mummification stages exactly as they would have done during the Ptolemaic era. That mess of stone and wooden scaffolding you have galloped past several times is actually a meticulous reconstruction of the aqueduct designs that were brought to Egypt by the Romans. These, and hundreds of other facts, have always been part of the fabric of Assassin’s Creed Origins, not to mention the previous games in the series. They were just never visible to the untrained eye.

When playing through Origins I learned a great deal about the world of Ancient Egypt. Being a complete novice to the period, Assassin’s Creed taught me about the racism that was rife in the country, the quarrels between Greeks and Egyptians, the sibling rivalry between Cleopatra and Ptolemy XIII, and Julius Caesar’s involvement in the country’s political affairs. But exploring the same world through Discovery Tour has provided me with academic knowledge on how the Great Pyramids were engineered, the rituals involved in allowing the deceased access to the afterlife, and what Cleopatra went on to achieve beyond the events of the game.

In short: I have been educated by a videogame.

“This is a way to send a message,” Guesdon says. “Videogames as a medium are extremely powerful. They are now part of the daily life of everybody, and so we shouldn’t ignore the potential of such a medium when it comes to other purposes. Discovery Tour is a first try, and the idea is to really trigger discussion and say that we can do other things with these worlds.”

It is exciting to think about what could result from Discovery Tour being a success. Imagine Total War games that show the minute details of strategies planned out by historic generals, or a Call of Duty that trades explosions for an oral history of 1944 – these are just the most obvious examples of gaming’s unlocked educational potential.

But even if Discovery Tour is a one-off, its 75 detailed tours are not to be missed by anyone with a thirst to know more about this period, or the level of research that goes into a game like Assassin’s Creed.

The tour is freely available to anyone who already owns Assassin’s Creed Origins but can also be picked up as a standalone offering on Steam and Uplay. If destiny permits Ubisoft to live out their dreams, you can expect to find gaming clients installed on many more school computers in the near future.