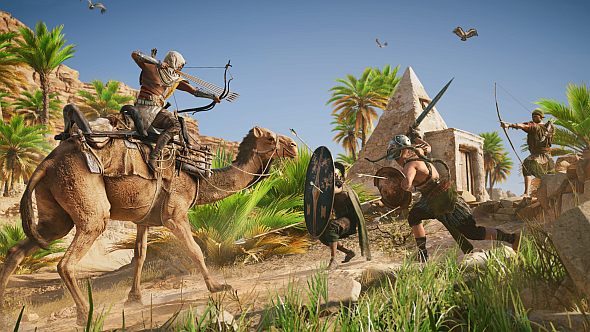 Assassin’s Creed Origins will feature a ‘Discovery Tour’ mode that turns its Ancient Egypt open world into a living museum, complete with guided tours through key locations and a wealth of historical facts.

Need to know more? Here’s everything we know about Assassin’s Creed Origins.

Ubisoft’s alt-history games have always prided themselves on their close attention to actual-history, but the Origins studio have gone one step further to ensure that the game is a completely interactive history lesson. Discovery Tour, which will be added Origins as a free update in early 2018, will allow players to freely explore the game world without the threat of enemies or the distraction of quests. Guided tours will lead players to multiple locations and provide text, voice-over, and photographs of real-word items to help explain the culture of Egypt circa 300BC.

During the reveal of the mode, Ubisoft demonstrated a small section of one tour. This specific tour is estimated at 20 minutes to play through, and takes the player to more than twenty different locations. The area shown was at a mummification ritual, and audio commentary explained how corpses were preserved while an NPC tended to a body. The facts were accompanied by photographs of the tools used for such a process.

Ubisoft have not revealed how many guided tours the mode will feature, but they appear to function similarly to the director commentary systems as seen in games like Half-Life 2: Episode 2 and Deus Ex: Human Revolution. It’s a really neat way of using the meticulously-built open world, not to mention the numerous folders of historical research compiled for the game. And if this means history teachers will start booting up Steam in class, well that’s pretty great for the Youth Of Today.