I am sprinting across the rooftops of the ancient city of Alexandria as Bayek, the last of Egypt’s elite peacekeeping force known as the Medjay. Moments before, I was crouched in the sand meditating, watching the sun swing below the horizon as the sky’s hue shifted in a beautiful time lapse. You see, this Assassin’s Creed Origins mission requires darkness, a time when many of the city’s sentries are tucked into bed. The decision to wait for nightfall also grants me the perfect opportunity.

Just as I catch up to the cart I am here to steal, I spot them – embers floating up in the breeze. A brazier crackles in the street, so I pull back my bowstring and dip the arrowhead into the hot coals. The cart of goods is careening towards me. Its driver’s health bar tells me a direct hit to the head with this elemental spear will kill him in one shot, so I loose the arrow and it flies true, striking him in the bonce, setting him alight, and unseating him onto the mosaic floor. It could not have gone better. The sun is rising, the driver is roasting, and I am trotting off with the goods. See ya. 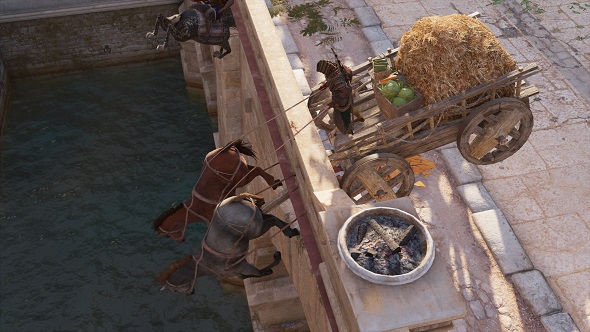 My next set of moves do not work out so well. While escaping the driver’s allies, I accidentally find myself crossing a bridge that will leave me on the other side of my objective, so I attempt a quick U-turn. Unfortunately, there is not enough room for me to manoeuvre the cart and my two horses without going over the edge. My cart is pulled up to the lip of the bridge, leaving the horses dangling, saved from the fall by my hands somehow still gripping the reins. One of my pursuers goes over too, but in more peril than me, both him and his horse go tumbling into the water below. Then suddenly, my reins snap, and I can only watch as my two horses splash into the river and swim to freedom. Mission failed.

In that short sequence of events, a lot of things happened that I would never have expected from an Assassin’s Creed game. It is the result of Ubisoft changing their approach to the series, pushing for a play space that allows for more emergent experiences, where your actions can have unexpected consequences. Take dipping the arrow in the fire – it has been done before, but it feels almost revolutionary in an Assassin’s Creed game. Likewise, drop your torch mid-fight and you may end up battling in a blazing inferno. Oops, looks like you are an arsonist now.

In one rescue mission, I save a village from the tyranny of the Romans, striking the soldiers down with my poisoned blade. The thing is, the poisonous gases rising up from their corpses also happens to kill the entire town. Oops, looks like I am a war criminal now. Another time, I rescue a man’s horse and return it to him, only to trot off on it once the mission was complete, leaving the man horseless once again. That is just one of those unwritten videogame rules, right? As I crest over the nearby hill I hear him screaming, “Hey, that’s my horse!” Oops, looks like I am a thief now. Nothing is true, everything is permitted, or something like that. At least my victim can now have a slow stroll and appreciate his surroundings during the long walk home now. 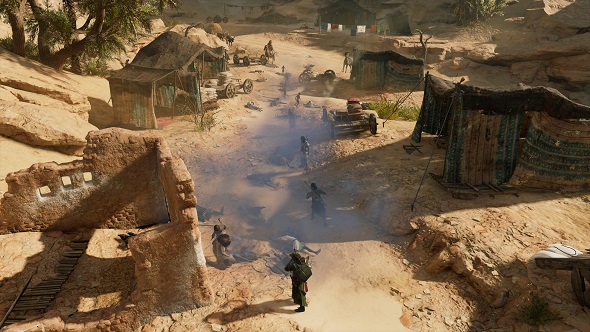 Assassin’s Creed’s worlds are always gorgeous, but usually in a very sterile way – they are wonderfully made, but they feel like movie sets rather than lived-in places. Assassin’s Creed Origins changes this – its world fizzles with life. Things break. Material sets alight. Kick over the first of a row of candles and they will all topple over like fiery dominos. NPCs stop each other in the street for a chat, and the ecosystem whirs away convincingly, making the world feel alive. There are hundreds of animals hunting, grazing, swimming, and soaring over its vast landscapes, thousands of street folk, soldiers, and merchants chatting and wandering around. Your interactions with this ecosystem anchor you to the world.

When I tipped my horses over the bridge, I honestly thought my cart was just stuck there at first. I was totally surprised when the unfortunate nags plopped into the water. The same goes for when I got a prompt saying I could retry the mission at any time, and even from that specific checkpoint if I wanted to – I was free to wander off and do something else first, just in case those freshly-baptised seahorses put me in a bad mood. I am even surprised that, after the hours and hours of play up until completion, there was not a single mission where I had to follow someone while remaining undetected. I know, right? It feels like Ubisoft really listened to the criticisms of the last few games in the series.

The UI is much cleaner, too – that hangover from the first game, where the inputs were so contextual that you needed reminding what each button did in every situation, is gone. There is just a compass at the top of the screen now, allowing you to really appreciate this incredibly detailed world. That huge sandbox is easily Ubisoft’s best creation. It is by far the largest the studio has ever conjured, but more than that, it is packed with variety: from lush green cities where the desert peels back to make way for a more civilised land, to vast sands where Bayek hallucinates in the stifling, hazy heat. 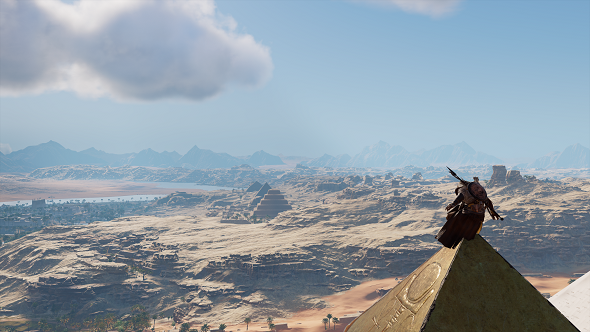 But for all of this, there are still some strange design decisions that hold Origins back. For one, there are multiple escort missions. These are not as frustrating as I feared – your allies cannot die – but “ALLY HEALTH LOW” still flashes up in large letters when they are under attack, for some reason. Your ally falls to the floor, then they get back up when you are done murdering everyone in their vicinity. It feels like the vestigial remnants of Ubisoft’s less progressive open-world designs. A smattering of visual bugs pull you out of the moment, too, though they are infrequent and usually rather funny.

Initially, I didn’t like the idea of stealth attacks not killing higher level enemies outright – it seemed to unpick much of the series appeal. But now, having experienced this new take on Creed’s fluid setup, it has grown on me. I tackled the later missions when they were in the red, meaning they should have been too hard for me to break through. However, you totally can – you just need to approach it like a proper stealth game, creeping by every guard without trying to take them out. It changes the feel of the game and gives you a good sense of accomplishment when you pull it off. Stealth feels better in general, too – there isn’t a sentry on every rooftop, so vantage points are more useful than ever, while stealth on the ground has binned that sticky cover system for a simple crouch-walk and ample foliage to support its use. Some aspects of the game have been simplified, while others introduce new complexities such as the new loot system where you hoover up gold and weapons, RPG stats that govern your attack and defense power, and a three-pronged skill tree – tools, stealth, and combat upgrades. 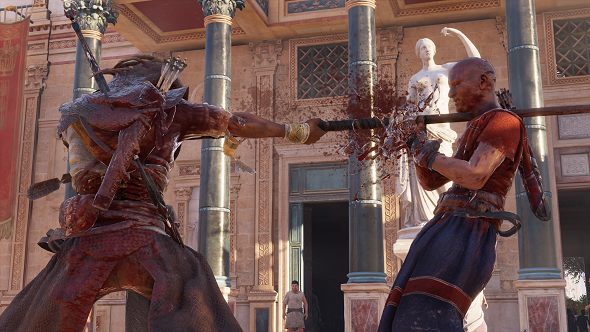 That is not to say the levelling system does not bring some annoyances, however. If you end up needing to assassinate someone who is a higher level, you are able to get that initial stealth hit in, but are then forced to fight toe-to-toe. A couple of hits can kill you, and your health can only recharge so much during combat. This encourages you to escape combat when injured, hide in a bush to recharge fully, then run back in. This can occur when you are the right level for a job, too, so your choices are to cheese encounters or grind sidequests. The core of the game is strong enough for this to not be too much hassle, but a lot of the sidequests feel like filler. The Witcher 3 this isn’t.

Assassin’s Creed Origins feels like a soft reboot. It is still recognisably Assassin’s Creed, but almost every aspect has been overhauled, from the mission structure to the combat. You can accept multiple quests at a time and approach them in whatever order you want. Combat loses the automation of past games, and gets rid of the invisible magnets that once governed your attacks – in Origins, you can swing and miss. You have to time your strikes, you have to use heavy attacks to break guards, you have to dodge, and you have to block.

The combat is not a perfect system, but it is better than it has ever been before. The same goes for the parkour-movement system – the automation is gone. You tap a button to jump, you tap a button to drop down. There is no holding a button down and hoping for the best as you tentatively guide Bayek over obstacles. Short hops happen automatically, but longer, riskier jumps are on you – you have to register intent. Because of this, it is much harder to get annoyed at the game for murdering you with a bad leap – it was you that splatted Bayek on the floor, you dingus. 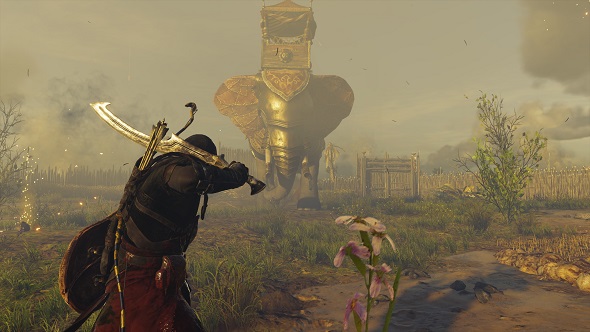 All of this is stitched together with a dark revenge story that comes to a bittersweet conclusion. Bayek is the most likeable Assassin’s Creed protagonist since Ezio, though his wife, Aya, who is playable in certain sections, manages to completely steal the show whenever she is onscreen. Running alongside this is a modern-day story of an Abstergo employee who has gone behind the company’s back to delve into Bayek’s memories. It is much closer to how the modern day sections were at the start of the series – the Desmond days – with you controlling the character just as you would an assassin, all while the Animus’s ‘bleed effect’ grants them acrobatic powers. These sections don’t feel intrusive and are usually over about as soon as you want them to be. They are far better than some of the stranger, puzzle-based distractions past Assassin’s Creed games have experimented with.

Ubisoft were hoping for two things when they decided to give Assassin’s Creed a gap year: they wanted to deliver a more polished experience, and they wanted us all to have time to miss shanking people in the neck in a gorgeous historical setting. They have achieved both. Assassin’s Creed as a series has had a strange evolution, but going back to the start of the story, the place where the entire Creed was formed, has breathed new life back into it. Absence really does make the heart grow, well, stabbier.