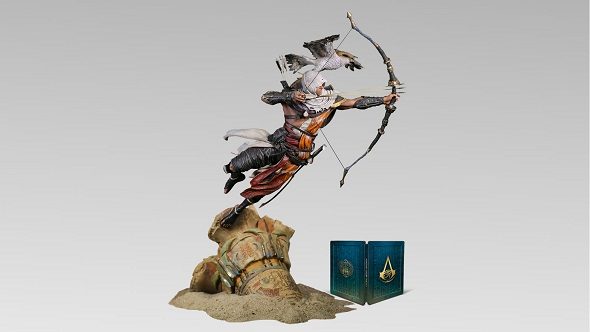 Ubisoft’s E3 2017 conference has just ended, giving us a first proper look at Assassin’s Creed Origins, the lovely-looking new game about hoodies who like stabbing folk. This one’s set in Egypt and you can pre-order it now.

Check out the PCGN homepage for more from E3 2017.

If you’ve got avocado for days, you might be considering buying one of the game’s special editions, perhaps complete with a lovely statue or something. Maybe you’re rich – perhaps earning over £80k a year, with plenty of money to spare – so you’re prepared to buy the most lavish edition possible.

If that sounds like you, the Assassin’s Creed Origins – Dawn of the Creed Collector’s Case – Legendary Edition (real name) is just for you. Priced at a modest £699, you could probably hire a real-life assassin instead. This won’t send Bayek round to crack open a cold one with you, however.

Here’s what it does get you:

This is a limited run and there are only 999 available. If you don’t hate yourself as much, the lower tier – which offers almost exactly the same, minus some resin and with a smaller figure – is £580 cheaper.

If you do hate yourself though, check it out on the Ubi Store.