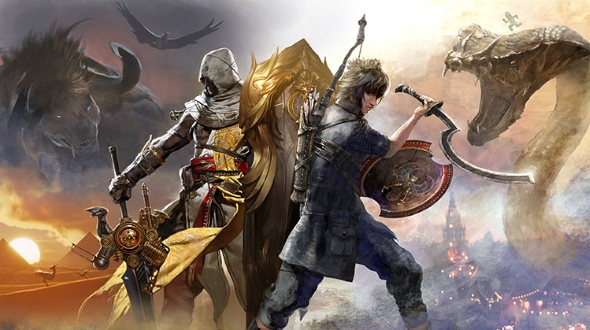 I really like Assassin’s Creed. I’ve got high hopes for Origins and am looking forward to seeing how it works as an RPG. But a surprise announcement from Ubisoft and Square Enix has revealed the Assassin’s Creed game I never knew I desperately wanted. It’s called Assassin’s Festival, but a more apt title might be Assassin’s Creed X Final Fantasy XV. Yep, the two games are colliding. Now all I can think about is assassins with incredible hair plunging hidden blades into hideous beasts.

Check out the other great ideas for game crossovers we have.

Assassin’s Festival is a silly bit of cross-promotion DLC for FFXV on PS4. We may never see it in the PC version of the game when it arrives in 2018 – hopefully we do! Regardless, Assassin’s Festival looks gloriously stupid. It dresses the Final Fantasy boys in outfits taken straight from Assassin’s Creed, and allows them to run, climb, and stab just like Ezio and the rest of the screeching eagles gang. 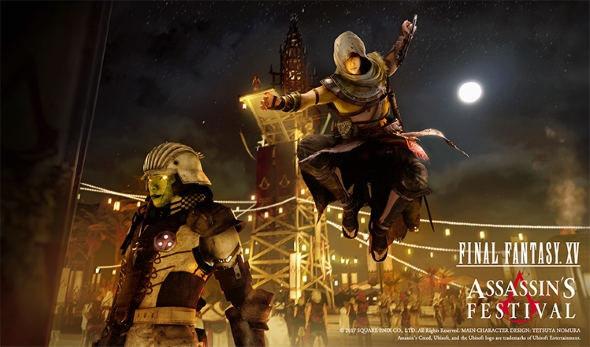 While it’s only a small aside for Final Fantasy XV the trailer has me really excited. It features Noctis, dressed as Altair, scaling a tower and parkour running across the skyline. But rather than straight acrobatics, it’s punctuated with FFXV’s beautiful teleportation effects. As Noctis slides a hidden blade into the backs of his enemies, their armour erupts in bursts of electricity. They’re then pulled into a hay bale that happens to be sitting in a futuristic city for no reason whatsoever.

If you hadn’t realised by now, I adore the outlandishness of this crossover. It blends the incredibly po-faced Assassin’s Creed with the beautiful, crazy sci-fi of Final Fantasy to create something that, if only visually, looks rather striking. I love the juxtaposition of historical clothing against overwrought fantasy design, the contrast of the (somewhat) realistic parkour with combat that involves hurling balls of magic at monsters and mechanised weapon platforms. 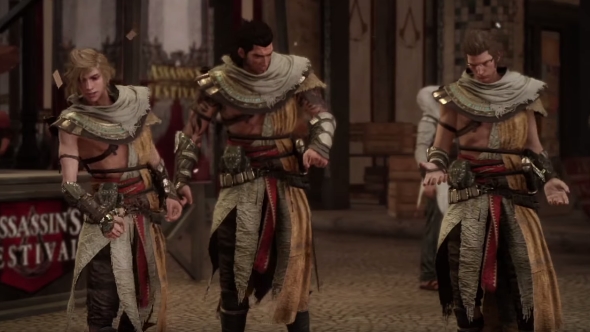 I don’t want Assassin’s Creed X Final Fantasy XV to be a small slice of DLC that will be forgotten come tea time. I want it to be an entire game. I thought Assassin’s Creed’s reinvention as a Witcher-like RPG with Origins was a bold enough change for me, but now I realise it’s not. With its old gods and time-travelling genetics science, the Assassin’s Creed series has always been quite stupid – despite its overall seriousness – but now I desperately want it to jump the shark.

I want Assassin’s Creed to embrace absurdity; to run with a storyline where time collapses in on itself and sci-fi elements start appearing in Ancient Rome, or vice versa. I want assassins that can hurl themselves from steeples while firing an ice elemental revolver, and use a teleportation device to escape the back-breaking fall. Screw believable historical figures, I want a boss fight against Julius Caesar riding a giant boar mount, and backed up by the literal god of war.

It’s an impossible dream, of course. But I’m going to hang onto hope that, one day, Ubisoft will create something that evokes the same childlike excitement that a two-minute trailer has drawn out of me. And hey, Mario + Rabbids has happened, so perhaps there’s still a chance…