The never-ending struggle between the Assassins and the Templars comes to Victorian London in the latest Assassin’s Creed; find out more and learn how to get the game for free from NVIDIA.

Over the last eight years the Assassin’s Creed series has been creeping forward through the centuries, from its debut in the time of the Crusades, through the Renaissance and the American and French Revolutions, and now it’s on the cusp of the modern era.

Assassin’s Creed Syndicate is set only 70 years after the previous title, Assassin’s Creed Unity, but in that time the Industrial Revolution has taken place and the world has changed more than in the preceding 700 years. New technology has transformed people’s lives, but not necessarily for the better; the gap between rich and poor is greater than ever, and the exploited working classes gang up together in the struggle to survive.

Naturally the Templars have a hand in this exploitation of the workers, and so enter the Assassins, spotting an opportunity to carry on the age-old battle against their arch-enemies. Their hero this time is Jacob Frye, a hand-to-hand combat expert and a member of notorious street gang, The Rooks, who’s going to give London back to the people, but not without a struggle.

And so we’re off on a rooftop-hopping romp through Victorian London, in the biggest and best Assassin’s Creed yet. As Jacob Frye it’s up to you to rise through the ranks of The Rooks and then lead it against rival gangs in order to bring freedom to the oppressed masses. As a fully-fledged Assassin, Frye’s pretty handy in a fight and has a tasty assortment of weaponry to give him that extra advantage when things get messy.

In addition to the Assassin’s gauntlet – equipped with a poison dart, perfect for taking down enemies at a distance, as well as the traditional hidden blade – and a set of brass knuckles, Frye is equipped with a kukri, the curved Nepalese knife favored by the Ghurkhas. Frye also has a cane with a concealed sword and a rope launcher that enables him to scale buildings in seconds and zip line from rooftop to rooftop to avoid London’s congested streets. 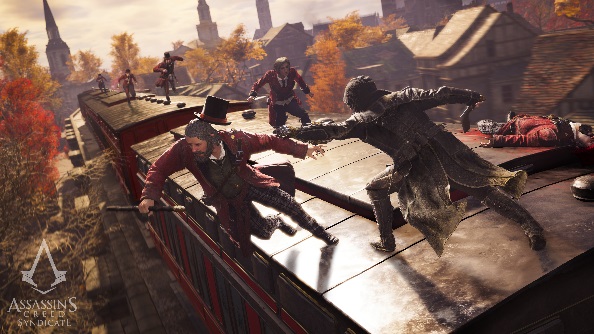 Naturally combat plays a big part in the game, and Assassin’s Creed Syndicate features a whole new fighting system that focuses on close combat using melee weapons, with a multi-target system to help you pick an opponent from within a large group, multi-kills for taking down groups of opponents in one go, plus counter-moves for turning an enemy’s attack to your own advantage.

Ubisoft describes the combat as feeling more brutal, violent and dirty than ever before. But if it all gets too much and you need to get away then there are more crowds to blend in with, as well as plenty of vehicles to hide in, including horse-drawn carriages and railway trains.

It’s not all about the fighting, though, and it’s not all about Jacob Frye; there’s also his twin sister Evie, who’s the game’s second playable character. While Jacob’s a full-on brawler, Evie’s a more subtle Assassin who relies on stealth and cunning, and who strikes silently and swiftly. Over the course of the main single-player game you’ll play as her in a series of missions that require a lighter touch.

Beyond the assassination business, there’s also the business of building up your gang’s power and influence, and taking London back from the Templars, and Assassin’s Creed Syndicate is filled with side missions to help you achieve that aim: conquering enemy strongholds, rescuing child laborers, train, carriage and boat heists, and epic gang wars to decide control of each of the six London boroughs – Westminster, the Strand, the City of London, Whitechapel, Southwark and Lambeth – that the game’s set in.

And there’s more: carriage racing through London’s overcrowded streets, Templar hunts and bounty hunting, and that’s all on top of the heart-stopping parkour action that’s always been a big part of the Assassin’s Creed series, complete with plenty of London landmarks to climb over, including the Tower of London, Buckingham Palace, Saint Paul’s Cathedral and the Houses of Parliament.

It’s due out for PC on November 19, and if you’re a little concerned that your system might not quite have the graphical chops to cope with that realistic London and its huge, bustling crowds, Ubisoft has teamed up with NVIDIA to help you out: it’s including a free copy of Assassin’s Creed Syndicate (or, if you prefer, Tom Clancy’s Rainbow Six Siege) with selected GeForce GPUs and notebooks. Find out more here.