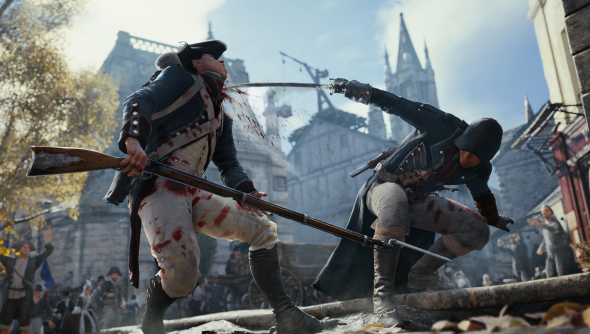 Assassin’s Creed Unity has more than its fair share of bugs – Arno was getting stuck in hay bales, falling through the floor, objectives weren’t completing, framerate issues. Heck, there’s a lot.

Ubisoft’s been working round the clock since release to get on top of the problems players are discovering and their next patch will be fixing more than 300 of them.

“Patch 3 includes over three hundred fixes designed to improve your Assassin’s Creed Unity experience,” Ubisoft write. There are still major problems that haven’t been fixed, however: “While you might notice some improvements to framerate as a result of Patch 3, we still have a future patch planned to further address framerate concerns.”

The bulk of the patch fixes specific breaks in mission scripting. Previously it would leave the player stuck, unable to progress with the mission.

The patch is coming to PC some time this week before the weekend.

You can read the full patch notes over the page.