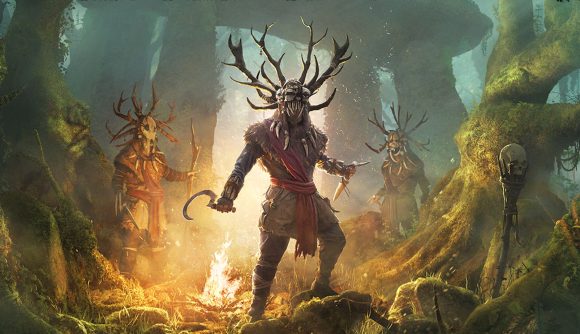 The first major piece of Assassin’s Creed DLC has been pushed back to May, but it looks like we’re getting some early hints on what to expect. The trophy list for Wrath of the Druids has popped on PlayStation 4 (and only there, for now), and the list of achievements reveals a few things to expect from the expansion. Including killing snakes.

Yes, there’s a challenge called The Legend of St. Patrick, which asks you to “kill the only snake in Ireland”, referencing the myth of St. Patrick driving the serpents off of the island. Now, here’s the question – does this mean you’re actually going to find a single snake to kill in the DLC? Or is there going to be some sort of proto-Templar named “the snake” who needs to be murdered?

There are also a load of gameplay features named here, including a ‘trial of the Morrigan’, ‘royal demands’, collectable amber shards, and new weapon types and armour sets. You’ll be able to wield sickles here, and you’ll be collecting a set of ‘Dublin Champion’ armour. Sounds swanky.

If you don’t have a PS4 handy to check out the trophy list, you can see it in the tweet below, or in the JorRaptor video it references.

Here are some of the Hidden Trophies for the DLC via @Jorraptor! pic.twitter.com/lt9jxh1g28