Assetto Corsa Competizione is not Assetto Corsa 2. Assetto Corsa is your usual racing sim: it offers a bunch of cars, events, and a tracks for you to figure out what kind of racing you want to do. Granted, it’s excellent, and does a remarkable job of capturing the essence of driving a performance vehicle at speed. But it’s hard for a game to reach real greatness when it’s trying to give you a little bit of everything, instead of mastering a single idea.

Assetto Corsa Competizione is the official game of the Blancpain GT Series. Gone are the road cars and race cars that aren’t GT3s. Also gone are a number of tracks. For the pre-release version I played, it’s actually down to one car (Lamborghini Huracan GT3) and one track (Nurburgring), but the final version will of course have everything from the series.

With this self-imposed limitation comes the opportunity for real refinement. Getting 17 cars perfect and laser scanning ten tracks takes a lot of effort. Offering dozens of cars and tracks just means that, unless it’s a multi-year project with a constant influx of cash, the resources aren’t there to attain perfection. That’s why this limitation appears to be laying the foundation for brilliance.

The car dynamics are fantastic already. They wiggle believably when given overzealous inputs, get a bit sphincter-clenchingly unsettled if you hit a curb too aggressively, and maintain just a hint of oversteer before spinning out. That’s what real race cars do – they’re not meant to drift, but they are meant to give enough feedback for a skilled driver to feel when the limits are being pushed. It’s genuinely difficult, and it should be. 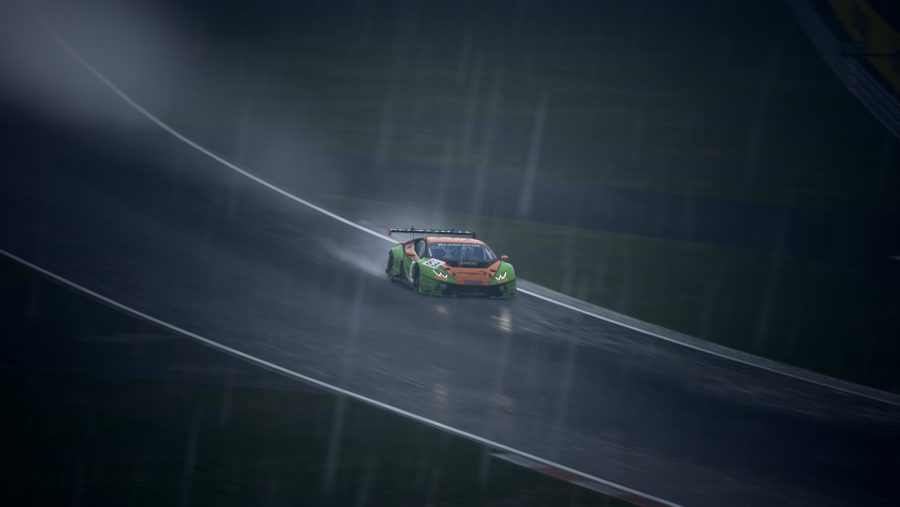 As is it is on actual asphalt, driving a race car in Assetto Corsa Competizione is dramatically different from a road car, even when pushed to the limit on the track. Even the more hardcore sports cars are designed to give leeway to amateur drivers who just happen to have the cash for something fast. Race cars assume professionalism from the driver and don’t tolerate sloppiness – it’s a level of trust in your driving skill that few other racing games offer. The weather is also some of the most realistic I’ve experienced in a game. I’m one of those drivers who loves a wet track, and that feeling of reduced grip and increased opportunity to set yourself apart from the pack kept me coming back.

Ode to the road

At the other end of the spectrum of Assetto Corsa, we have the much more arcade-influenced Forza Horizon 4. Both games, however, share love for good asphalt.

Where Assetto Corsa Competizione falls a bit short is the force feedback and the setup. A significant portion of my time was spent configuring my wheel (a Fanatec Clubsport) by navigating a few unintuitive menus and eventually discovering that all my inputs were inverted by default. While I’m happy I was able to change it, I’m a bit baffled as to why I had to do it in the first place.

Once I finally got out of the pit lane I found another problem: the steering is surprisingly light and feels dead. This wheel is usually a fairly good communicator, which is odd that it felt like it was giving me a leisurely cruise in a 2001 Buick Century rather than an assault on the Nurburgring with a Lamborghini race car. I turned the force feedback gain up all the way and it was closer to what I was expecting. Once that gets sorted out this could easily be one of the best racing sims out there. Beyond that, I’m happy to see the Blancpain GT Series get a dedicated game, and overjoyed that it’s one with such attention to quality.