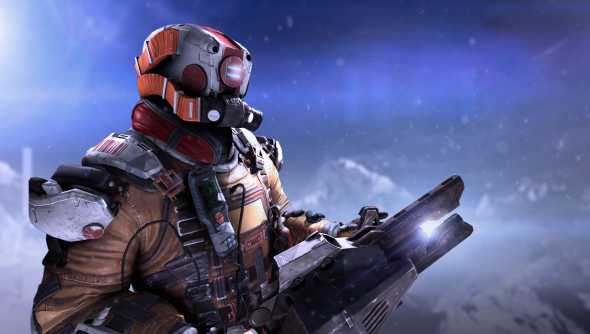 When you look at Asteroid, the top-down 2D shooter where you fly around in a small spaceship and shoot asteroids, do you think it should be an open world survival game with crafting mechanics? If not, luckily, Atari do so you don’t have to.

Asteroids: Outpost plonks you down on the moon and makes you turn a hunk of moonrock into a profitable business.

Outposts dumps you on a hunk of moon rock and tasks you with searching out resources to mine. Once you’ve scavenged ore you can craft new equipment and expand your base. Atari say that your base will be highly customisable but they don’t say exactly how customisable, it may be on par with Space Engineers or it might be something much simpler.

Atari also say that Asteroids: Outposts will draw much of its challenge from multiplayer, where players will have to fight it out for the best territory.

So far it sounds nothing like the 1979 shooter. However, some vague similarity comes from the recurring asteroid showers. They’ll destroy you and your base if they hit with enough force so you need to shoot them down before they make landfall.

“Asteroids is one of the most iconic titles in Atari’s portfolio of more than 200 games and franchises, and we’re looking forward to ushering the game into today’s digital gaming era,” Atari CEO Fred Chesnais said, while rubbing his hands for warmth.

“We’re paying homage to the original Asteroids by incorporating classic features such as asteroid blasting capabilities, while introducing a completely new premise and gameplay,” he continued, a hint of desperation entering his voice. “Asteroids: Outpost will appeal to both fans of the classic Asteroids as well as enthusiasts of immersive survival games and expansive MMOs.”

Asteroids makes the latest in a line of Atari reboots. There’s also Alone in the Dark: Illumination, a co-op shooter; Haunted House is being resurrected as a survival horror; and Rollercoaster Tycoon’s getting a remake, too. I hear they’re turning Pong into an MMO.