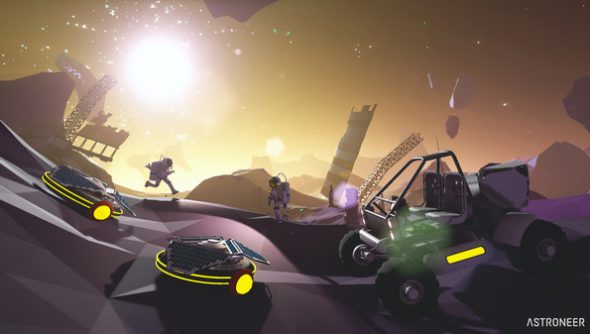 Astroneer looks like it could be great. It’s a survival game – no, wait, come back… This one looks interesting, honestly. You see, this isn’t about chopping down trees forever, this is a game about adjusting an entire planet to suit your survival needs – multiple planets even, and moons.

This survival game is focused on playing on planets, but if you prefer floating among the stars you should check out our list of the best space games.

You can hop between planets in a landing module in Astroneer. It’s an automated process, but watching your friend blast off from the moon you’re stood on, only to land at the planet hanging against the horizon, looks like a great experience.

A new developer diary has released and it shows off some three-player online planet survival. One of the game’s biggest hooks is its terrain deformation, which allows you to raise and lower any section of the planet, creating huge bridges or deep tunnels.

Imagine creating intricate race tracks filled with massive ramps and then racing your friends in the game’s buggies. In this gameplay video, instead we’re shown the creators using the terrain to form a base for the buggy to protect it from an impending sandstorm.

Following that, they all burrow underground in the hunt of minerals, getting lost in the procedurally-generated cave while their batteries dwindle. It looks like a stupid amount of fun. See for yourself in the video below:

Astroneer is coming to Steam Early Access some time this year.