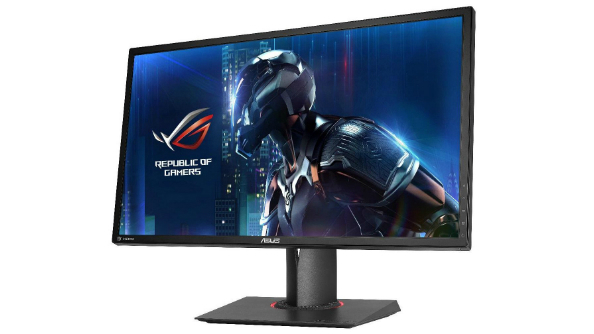 Two new panels enter Asus’ ROG Swift fold at Computex, both of them smaller 1080p panels designed to deliver lightning-fast G-Sync supported refresh rates. Thought you were alright with that 120Hz panel? Well yep, you totally, absolutely are. That’s more than enough refreshing, if anything. But here are some numbers to make you feel annoyed and outdated anyway.

Looking to find out what your hardware’s capable of? Load up one of our best VR games, that’ll separate the strong from the weak.

Starting with thePG248Q then, Asus are offering a 24-inch, 1920 x 1080 panel with a 180Hz refresh rate and G-Sync functionality. As you’d expect from such a fast display, it’s a TN panel type. That means poorer colour reproduction and screen uniformity than IPS screens (broadly speaking), but the latter in-plane switching tech isn’t really suited to running G-Sync at 180Hz.

Why is a faster refresh rate better? Well, the law of dimishing returns can certainly be applied here, but G-Sync works by dynamically adjusting a monitor’s refresh rate to match the frame rate, eliminating screen tearing and stutter. The higher the monitor’s refresh rate, the higher the ceiling for fps. Can anyone truly tell the difference between a game running at a silky-smooth, G-Synced 60 fps and, say, 90 fps? There are probably people who’ll tell you they can, but it’s certainly nothing like as dramatic as the difference between 30 and 60, G-Sync or not.

Not content with 180Hz, Asus are also releasing the PG248Q with an upper refresh rate cap of 240Hz. Two hundred and forty. It’s a 1920 x 1080 panel too, just 24 inches big, and definitely isn’t overcompensating for anything with that obscene refresh rate. No sir.

Pricings and release dates have yet to be announced by Asus, but expect more in the coming weeks. In all seriousness, these two announcements are positive news for PC gaming because they indicate that G-Sync panels and higher refresh rates are becoming easier to manufacture and cheaper for the consumer, slowly but surely. Not that these two will be cheap, but over time they’ll force down the price of plain old 120Hz G-Sync panels, which are more than adequate for just about anyone.