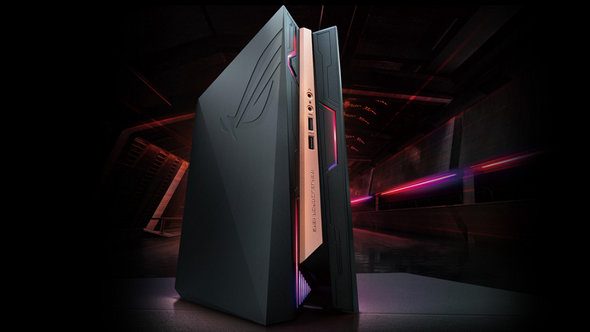 Asus recently revealed their ROG GR8 II, a console-sized gaming rig with a rather impressive amount of power under the hood. Designed with a plug-and-play ethos and built specifically for VR gaming, this latest addition to their ‘Republic of Gamers’ line of equipment has clearly taken some inspiration from the current generation of consoles. It sports a very slim chassis and a front panel with headphone and mic ports, clearly aping the design of the PS4 and making it the smallest VR-ready PC on the market.

A PC this fancy deserves decent peripherals. Check out our list of the best gaming keyboards out there.

But the hardware inside is where the console comparisons end. The top end version comes with a Core i7-7700 Kaby Lake processor and 32GB of DDR4 RAM. An Nvidia GeForce GTX 1060 graphics card tops off what is an impressive piece of machinery, especially considering it weighs in at a skinny 4kg.

Paying special attention to its VR focus, Asus claim to have tested the console extensively with the Oculus Rift and have bolted on two HDMI ports as well as a DisplayPort, allowing you to play on up to three monitors simultaneously. It also boasts a rather impressive cooling system, with dual fans and copper heat pipes. You’ll also be having a fairly quiet gaming experience as the system generates less than 32db of noise while running idle.

We do not yet have a release date for the ROG GR8 II, but you can head over to the system’s official page for more details.