Intel has just officially launched 9th Gen Coffeelake H-series CPUs alongside Nvidia’s GTX 1650 and mobile 16-series GPUs, and new laptops are already rolling out thick and fast with the latest silicon in tow. We managed to get a peek into what Asus is planning to do a little early, and according to the Taiwanese tech giant it’s all about 240Hz and thin and light streaming laptops in 2019.

Intel is bringing up to eight cores of processing power to the table with its 9th Gen Coffee Lake H chips for mobile, mimicking the core count of its top desktop chip, the Core i9 9900K. But it’s not just Intel making waves this week, Nvidia has also announced its bringing the mainstream Turing cards, the GTX 16-series, to laptop with the GTX 1660 Ti and the GTX 1650.

To capitalise on the double whammy of laptop silicon launching this week, Asus has announced eight new laptops going on sale today or over the next few weeks. These range from the ultrathin, ultra-powerful Zephyrus range – fitted with the more-than-capable RTX 2070 and a 240Hz panel – to the affordable essentials of the TUF lineup.

There are three new Zephyrus slimline gaming laptops announced today: G, M, and S. The S (GX502) is the flagship model, starting life at £2,500, and kitted out with the very latest Intel Core i7 mobile CPU and squeezing in an RTX 2070. It also comes rocking one of those 240Hz refresh rate screens Asus reckons will be all the rage in 2019.

Desktop alternative: These are the best graphics cards

However, while that’s fantastic for the well-endowed wallets among us, of the three it’s the Zephyrus G (GA502) that caught my eye. It’s the cheapest, starting life at £1,250, and therefore the lowest spec of the lot when it comes to graphics and CPU power. However, it’s the only one blending 3000-series AMD Ryzen Mobile with Nvidia’s 16-series and Asus reckons that is seriously capable even for content creators. 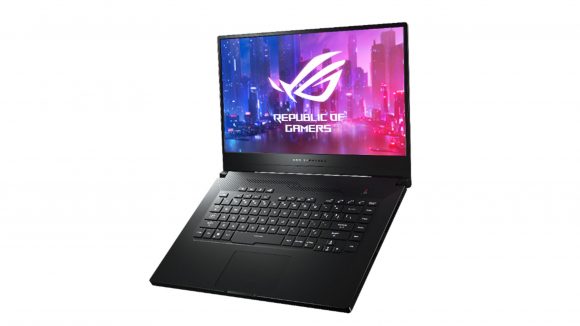 While you may have to put up with solely white keyboard backlighting, Asus reckons even this 20mm thick, 2.1kg laptop is able to meet a streamer’s needs. Touting the Zephyrus G’s gaming/streaming multitasking ability live during a recent event, Asus is hoping the Zephyrus G will sway greater numbers of content creators and professionals to consider its diehard gaming brand.

“The sleeper hit out of everything could be the new video encoder (NVENC) in RTX graphics and in Turing because that’s also available in the GTX 16-series,” Geoff Gasior, Asus technical marketing, says. “And that improves your streaming quality, it reduces your CPU utilisation, and it means, on a system like the GA502, you can stream and game simultaneously.

“I mean it’s not going to appeal to your pro streamers who use a second rig to run at super, super high quality,” Gasior continues, “but for your average person, who’s just streaming for fun, recording their own game to make highlight reel clips and things like that, I think that, just given the popularity of streaming and how much more accessible that can make good streaming for a wide audience, it could be kind of the sneak technology of the year.”

But if the next big thing isn’t streaming on an ultraslim laptop, Asus is hoping it’s 240Hz displays. This year Asus is adopting 240Hz panels across a selection of its gaming laptops, including the Zephyrus S, Zephyrus M, Scar III, and Hero III, which all feature 240Hz refresh rate, 3ms response time panels.

“I think 240Hz is going to be huge,” Gasior says. “Esports is blowing up. A lot of people are playing these fast paced shooters, especially Battle Royale. People are, even if not competitive in a pro gamer sense, they’re competitive in a ‘I want to win, I want to do well’ sense. And once you experience 240Hz, it’s hard to go back and do a slower display. And I think it’s just high refresh has been one of those things that improves the experience so much, I think that’ll be a big thing – especially this year.”

And even if you’re not an esports pro or hopeful, Gasior compares a 240Hz monitor to buying the same basketball shoes as LeBron James or a supercar. Sure, you don’t need all that extra stuff – the intricacies of cutting edge material science doesn’t matter much on a grubby outdoor court or the M25 – but you’ll want it anyways. And gamers will notice the fluidity and enjoy the 240Hz experience regardless of whether they’re fighting for a championship during which reaction times are everything or fighting to save face on Discord with a couple friends.