Asus has teased a concept for the future of motherboards at Computex 2019. The Prime Utopia motherboard doesn’t abide by the limitations of today’s platforms, and is rated for neither AMD AM4 or Intel LGA 1151 sockets, but it does come with rear-mounted PCIe, liquid-cooling, and modular I/O for extreme mobo personalisation.

The Prime Utopia comes in retro Gameboy Advanced flair, see through and everything. But the styling takes a back seat to the new functionality. The front face is largely covered by a 7-inch OLED panel capable of monitoring the operation of every bit of the board, which is also detachable and touch-enabled for fan curve control right from the desktop.

That’s all rather low-key compared to the fully integrated liquid-cooling loop surrounding the board’s VRM, chipset, and socket. The system is mostly hidden beneath some futuristic aesthetics on the front, but is exposed on the rear of the board. With Ryzen 3000 X570 boards already packing serious VRM and cooling, future high-end boards are sure to get a little more technical with the integrated cooling solutions.

Even graphics card mounting has been tweaked for the better… or so Asus says. The company has shifted a PCIe connector onto the rear of the motherboard so that, sans risers, a user can mount their graphics cards in the rear of the case. This is touted as a way of bettering thermal management, but that all depends on the design of a case and whether any case fans are present. A rear-mounted GPU is likely not going to fly for most users.

Today’s finest: These are the best AMD gaming motherboards in 2019

Still, it’s nice to have options. And, speaking of options, Asus is dramatically increasing the modularity of its motherboards with hot-swappable I/O.

Most gamers, and especially those of you that stream, will know all too well the woes of running out of USB ports. But with the Prime Utopia Asus is posing a solution that would add serious flexibility into mobo design. Each rear I/O module, whether that be LAN or USB ports, can be replaced with any other combination of connector.

Of course that all depends on the chipset platform. There’s a little more to motherboard configuration than merely the ports available on the board – it really all comes down to overall platform bandwidth. So while this idea is pretty neat, it’s likely not going to change the status quo. 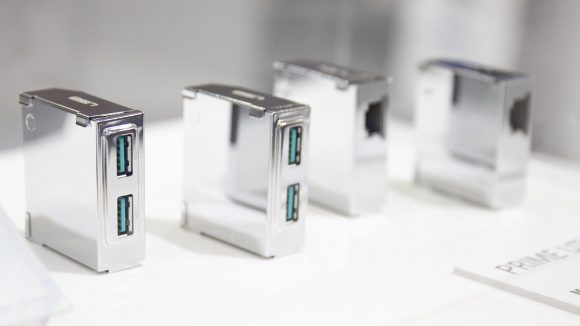 M.2 compatibility has also been increased with the board’s design, ready for the PCIe NVMe SSD revolution. The Utopia features four M.2 slots on the front, all with a dedicated air cooling solution.

The Prime Utopia might be more of a hopeful glimpse into the future than a realistic one, but there are potentially some lessons to be learned from the experiment. And the rig Asus built over at Computex to show off the concept is as stunning as it is entirely negligent of noise pollution.